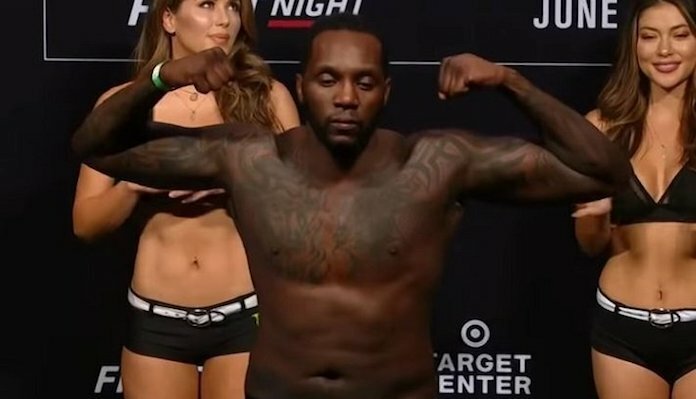 UFC middleweight Dequan Townsend has shared an inspiring message with the MMA community after both of his brothers were recently murdered.

Townsend’s brother Marcus Jackson-Burton, 32, and his half-brother, Steven Lee Jackson, 31, were both murdered in a random act of violence in his native Lansing, Michigan, on August 4. The men were shot at a strip mall and left for dead, but Townsend hasn’t had time to grieve. The bigger brother of both men makes the walk to the Octagon this Saturday on Fight Island when he takes on Dusko Todorovic in what is a must-win fight.

For Townsend, his UFC run has been a struggle thus far. The 34-year-old “Tarantula” was signed to the UFC in 2019 after going 21-8 on the regional scene. Unfortunately, things haven’t been easy for him since then as he’s gone 0-3 with losses to Dalcha Lungiambula, Bevon Lewis, and Devin Clark. He also failed a drug test for cocaine, which led to him having to enter into a drug rehabilitation program. He was suspended by USADA for six months.

Townsend has not had an easy life, as he also had to bury his son five years ago after four-year-old Malakye succumbed to cancer. But despite all of the trials and tribulations, Townsend — who also works as a nurse in his hometown — has remained positive. In an interview with UFC.com’s Thomas Gerbasi, Townsend wanted to send a message to the MMA community that urges people to remember that life is short.

“I want everybody to know that life’s too short. Cherish the people you love while you have them. You never know the last time you’ll have the opportunity to tell them that you love them,” Townsend said.

“This wasn’t no gang-related anything. Both of my brothers didn’t even live here. I’m from Michigan, we grew up in Michigan, but both my brothers had moved to Atlanta and had been there for eight years. And my other brother lived in Texas for the last year and a half. My brother from Atlanta came to help my sister move because I was in fight camp. My second brother, he just came to drop off his kids. It was the wrong place at the wrong time. Dude came in clear out of the blue, no argument, no confrontation, no nothing. Just walked into a restaurant and shot them. He took two innocent lives and took a great father. So value the time you have with your loved ones.”

Do you think Dequan Townsend will pull off the upset this weekend against Dusko Todorovic?