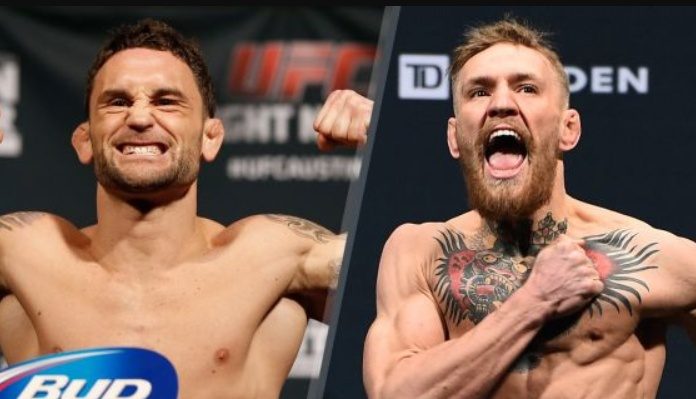 UFC superstar Conor McGregor praised Frankie Edgar in the wake of Edgar’s knockout loss to The Korean Zombie, saying he’s “forever an icon in this game.”

Edgar suffered a vicious first-round knockout loss in the main event of UFC Busan this past weekend against The Korean Zombie, having taken the fight on short notice to fill in for the injured Brian Ortega. McGregor is a former rival of Edgar and the two were in talks to fight in his return bout, but McGregor ended up being booked against Donald Cerrone instead.

Following his knockout loss, Edgar took to social media to thank the fans who had his back following the loss and criticize those who were negative towards him. McGregor saw Edgar’s tweet and jumped in the comments, showing Edgar some love during what’s obviously a less-than-ideal time for him after getting knocked out in brutal fashion just before Christmas.

Remember what was told in shootouts Frankie!
Stay low and keep firin!!!
Forever an icon in this game! #FrankieBaby

“Remember what was told in shootouts Frankie! Stay low and keep firin!!! Forever an icon in this game! #FrankieBaby”

The first part of his reply is McGregor referring to the lyrics of The Notorious B.I.G.’s classic hip-hop song Kick In The Door from the album Life After Death, which Edgar uses as his walk-out song for his UFC fights. Ironically, McGregor’s nickname is “Notorious.”

It’s very cool of McGregor to go out of his way and to give Edgar some love considering the two have been in talks to fight numerous times in the past. At the end of the day, the MMA community is a tight-knit one and it was kind of McGregor to praise Edgar when others have taken social media to bash him following his knockout loss to The Korean Zombie.

What do you make of Conor McGregor’s friendly remarks to Frankie Edgar?