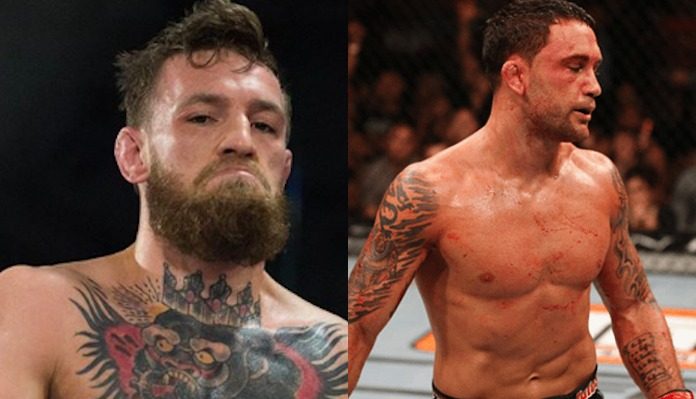 Conor McGregor and Frankie Edgar have both agreed to fight each other on social media. But, that fight won’t be happening according to UFC president, Dana White.

McGregor and his team have called for the Edgar fight, but White has seemingly shut that down in an interview with the Boston Herald.

“I said it leading into the Mayweather fight, ‘he may never fight again after this fight when you make this kind of money,” White said. “He’s fought once since then. Conor loves to fight and wants to fight again, but the Frankie Edgar fight isn’t going to happen.”

Why Dana White says the Conor McGregor vs. Frankie Edgar fight won’t happen is simple. He says it doesn’t make sense and the two are also separated by two weight classes.

“Edgar is two weight classes below him,” White said. “[Edgar] was supposed to fight Aljamain Sterling. Aljamain fell out and got hurt. Frankie is coming to the end of his career, and he could end up getting himself into a title position again. To take the Conor fight makes no sense.”

However, Frankie Edgar has said he will move up to welterweight for this fight. He just wants to fight the Irishman before his career is over.

Although Dana White says Conor McGregor won’t fight Frankie Edgar, he is confident he will fight again in 2020.

“I think Conor will fight next year,” White said.

Who he will fight is to be seen. Dustin Poirier seems adamant he is getting the fight, while a scrap with Justin Gaethje makes sense. But, McGregor has also called for the rematch with Khabib Nurmagomedov. Regardless, he has options for his return fight but it will not be against Frankie Edgar.

What do you make of Dana White shutting down the Conor McGregor vs. Frankie Edgar fight? Sound off in the comment section, PENN Nation!