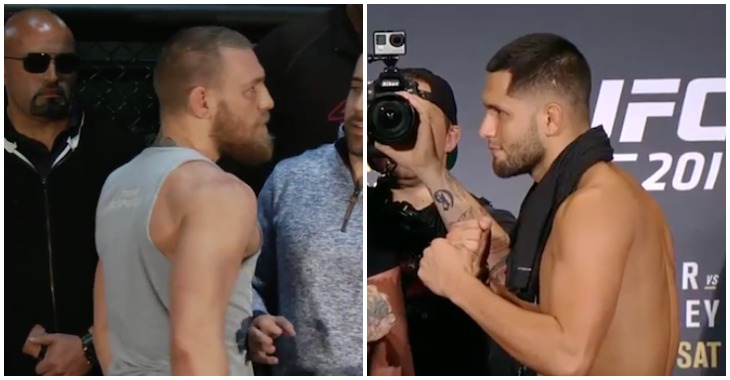 The Irishman has stated that he’s going to return later this year at 170 pounds. He’s been out of action due to a leg break last July against Dustin Poirier at UFC 264. Since that injury, McGregor has been on the shelf but has made his intentions known.

He would like to challenge UFC welterweight champion, Kamaru Usman. In order to prepare for a move up in weight, McGregor has clearly added some weight. It’s weight that welterweight contender, Jorge Masvidal, believes has been added due to steroids.

‘Gamebred’ discussed fighting Conor McGregor in an interview with ESPN Deportes. There, Masvidal noted that he has no problem fighting ‘The Notorious’. He also decided to throw an allegation toward McGregor, that he’s on steroids. First discussing the fight, Masvidal said:

“He is false, he knows that I am a man who hits hard and that I come to kill, I do not come to play hug in the cage, I am going to give everything inside me to kill him, and I have a little size, although now he’s injecting steroids and all kinds of things. But, he is still a little boy.”

Conor McGregor has now decided to go back at Jorge Masvidal on Twitter. In an already-deleted tweet, The Irishman said in response to the BMF Champion:

“An absolute pigeon brain this guy is. Stupid beyond belief.”

What do you think about Conor McGregor’s comments? Do you want to see the two welterweights fight?