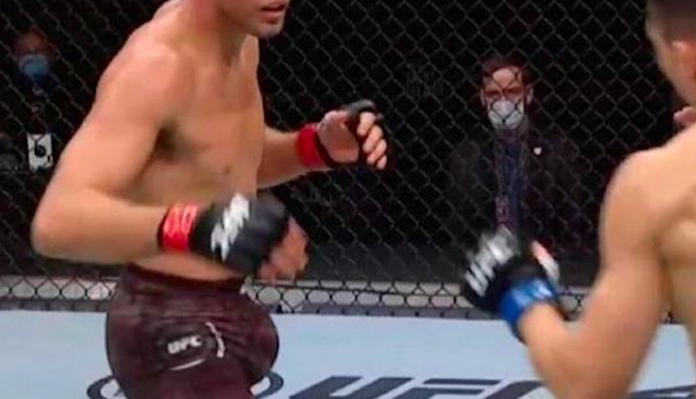 While many fans were impressed by the improvements he made in the striking department, others couldn’t help but notice that he seemed to be wearing a truly gargantuan protective cup.

It’s extra two inches of leverage on an arm bar

So are we just not going to talk about the giant cup? I mean really bro?

I mean somebody’s gotta ask Ortega about the cup right

Speaking on Instagram on Monday, Ortega finally responded to questions about this oversized protective cup. He explained that the cup actually belongs to his little brother, and that he accidentally put it in his suitcase when he was packing for his trip to Abu Dhabi for his fight the The Korean Zombie. Of course, it’s still a mystery why his brother is wearing a cup the size of a mixing bowl, but at least we know how it ended up under Ortega’s shorts?

Okay the real story of the Cup I was wearing. I was in such a hurry that when I left to Abu Dhabi I accidentally grabbed my little bro’s cup and left mines at home. @ortegaachriss thanks for saving my balls literally 😂😂😂

“Okay the real story of the cup I was wearing,” Ortega wrote on Instagram. “I was in such a hurry that when I left to Abu Dhabi I accidentally grabbed my little bro’s cup and left mine at home. Chris Ortega thanks for saving my balls, literally.”

Despite his cumbersome cup, Brian Ortega defeated The Korean Zombie by unanimous decision. He’s now expected to get the next crack at UFC featherweight champion Alexander Volkanovski.