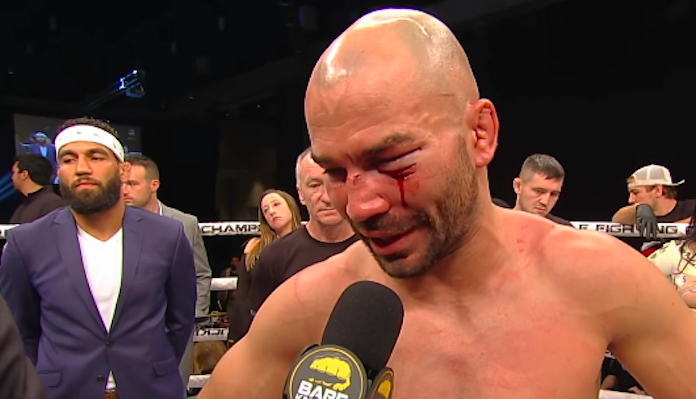 Back at UFC 264, McGregor was once again beaten by Dustin Poirier – this time as a result of a doctor stoppage due to a broken leg. After Poirier was interviewed by Joe Rogan, the UFC production team seemingly thought it’d be a good idea to go over and also speak with Conor, which didn’t end well.

“The Notorious” launched a string of attacks at Poirier before putting forward some pretty serious threats to prompt a response from his lightweight rival.

Lobov, who is preparing for a bare-knuckle boxing return against Denys Berinchyk in Mahatch FC this weekend, had the following to say on the matter.

“It was a mad situation,” Lobov said. “I mean, look at the way Anderson Silva and Chris Weidman were after his injury happened. [McGregor] was still sitting up and I do think interviews shouldn’t even happen in that scenario. I’m surprised that it did happen. It shouldn’t have happened, but it is what it is in a way. You have to move on and live to fight another day. Now it’s time to heal, train, fix mistakes, and go back again. That’s it.”

Lobov went on to suggest that he believes McGregor will be able to make a full recovery, although the popular opinion is that he could well be out of action for up to a year.

Artem, on the other hand, is ready to prove that he’s still got some juice left in the tank this weekend.

Do you agree with Artem Lobov? Also, do you expect to see Conor McGregor return to the UFC Octagon in the next twelve months? Let us know your thoughts on this ongoing saga down in the comments, BJPENN Nation!