Saturday’s highly anticipated headliner had huge high stakes as UFC President Dana White had recently revealed that the winner of tonight’s Zombie vs. Ortega fight would receive the next shot at Volkanovski.

Chan Sung Jung (16-5 MMA), aka The Korean Zombie, had entered tonight’s contest looking to earn his third victory in a row, this after scoring back-to-back TKO wins over Frankie Edgar and Renato Moicano.

Meanwhile, Brian Ortega (14-1 MMA) was competing for the first time since suffering an ugly TKO loss to Max Holloway at UFC 231 in December of 2018. That setback served as the first of Ortega’s career. ‘Blessed’ of course went on to surrender the strap to the aforementioned Alex Volkanovski at UFC 245. 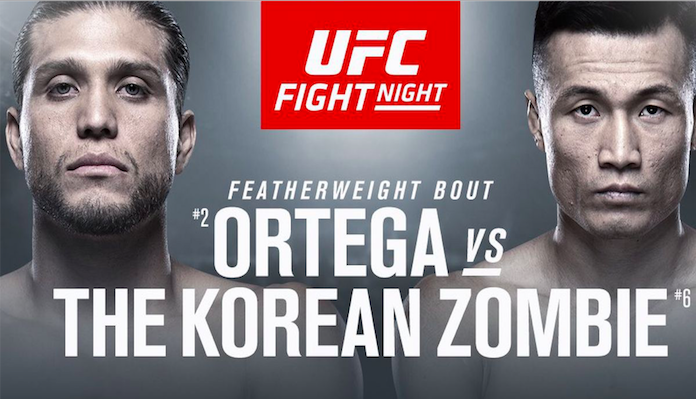 Tonight’s UFC Fight Island 6 main event did not prove to be the “fight of the year” performance many were expecting, at least not from The Korean Zombie’s end.  Instead, Ortega was able to outclass Jung for the majority of their five-round main event on route to a lopsided unanimous decision victory.

Check out how Alex Volkanovski reacted to Ortega defeating Zombie below:

They both patient and fighting smart…they know a lot is on the line! #UFCFightIsland6

It’s a different feeling with no crowd, reactions aren’t there and everything feels forced, seems like zombie is struggling with it. #UFCFightIsland6

Finally we have some direction in this division, get in there and take that #1 spot….that’s all I wanted!! #ufcfightisland6

Who do you think will emerge victorious when Alex Volkanovski and Brian Ortega collide for the promotions featherweight title? Share your thoughts in the comments section PENN Nation!