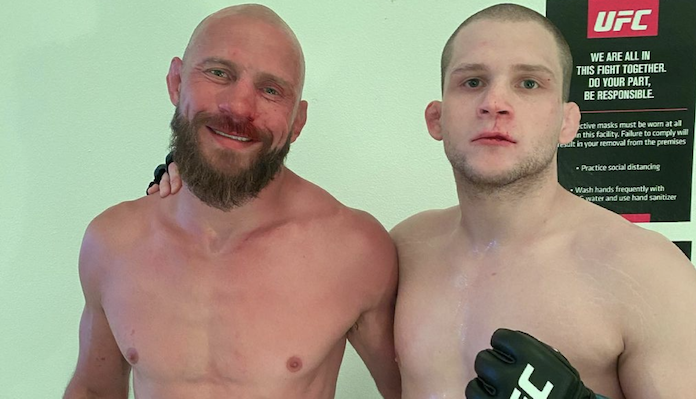 UFC welterweight Alex Morono praised “BMF” Donald Cerrone after knocking him out for the biggest win of his career to date at UFC Vegas 26.

Morono scored the first-round knockout after blitzing “Cowboy” early and putting him away with strikes in the opening round. It was a fantastic showing from “The Great White” as he picked up the best name on his resume to date. For Morono, to come in on short notice and defeat a legend like Cerrone is one heck of a win. Following the fight, he took to his social media to comment on the outcome of the bout. Check out what Morono wrote below.

Got the W!!! What a crazy week. Honored to share the Co-main in the octagon with Cowboy. One of the baddest mother fuckers to ever do it. Couldn’t be more proud to bring this victory back to Texas. The support is always so much appreciated. Huge shout out to my coaches @matthewparkwald and @sayifsaud keeping me in line and laser focused. 19-7. @ufc #tko #ufcfightnight #martialarts #ufcapex #legend

For Morono, this is a big win that should earn him another notable name in his next fight. In his last outing, he dropped a decision to current PFL fighter Anthony Pettis, but he went the full three rounds in that fight and gained some valuable experience. Against Cerrone, Morono didn’t want to waste any time and go the full 15 minutes as he instead chose to blitz Cerrone right out of the gates and finish him early on in the fight. It is nice to see these two fighters show some respect following the fight, and it will be interesting to see what Cerrone decides to do next after suffering yet another decisive loss.

What do you think is next for Alex Morono after picking up the biggest win of his career over Donald Cerrone at UFC Vegas 26?