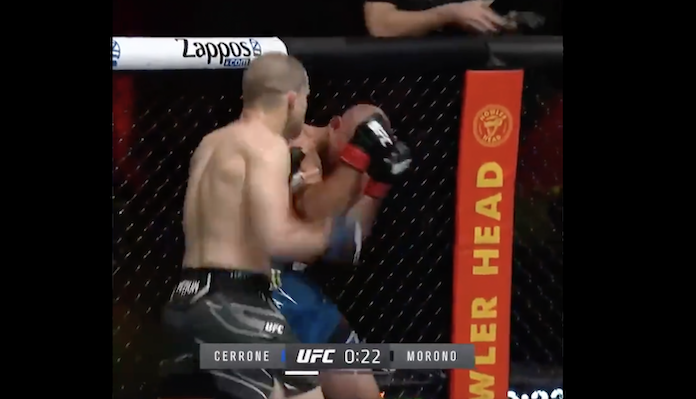 Cerrone suffered his fifth loss in his last six fights after getting stopped with punches by Morono in the first round of Saturday’s co-main event. Morono took the fight on short notice after Diego Sanchez was pulled from the card, but as he told BJPenn.com’s Cole Shelton earlier in the week, he was in training alongside Fortis MMA fighters Diego Ferreira and Geoff Neal for this particular card. Morono was clearly in fight shape and ready to go as he came out storming from the opening bell and stopped Cerrone with punches in the first.

For Cerrone, he is now winless in his last six fights overall, with his only non-loss in that stretch coming in a No Contest against Niko Price. Following the defeat to Morono, there are now serious questions about whether or not Cerrone will ever fight again. For now, he has released a statement on his social media about the latest loss in his UFC career.

We ride and never worry about the fall. Those who never got bucked off, never nodded before.

It will be interesting to see what’s next for Cerrone. For most fighters, going 0-5, 1 NC over your last six fights would result in you being released from the promotion, but in the case of Cerrone, he’s an absolute legend of the sport. UFC president Dana White said after the Price fight that he wanted to have a talk with Cerrone and it seems likely that he will want to have a chat with him after losing in such a vicious fashion to Morono on Saturday night.

What do you think is next for Donald Cerrone after losing via TKO to Alex Morono at UFC Vegas 26?