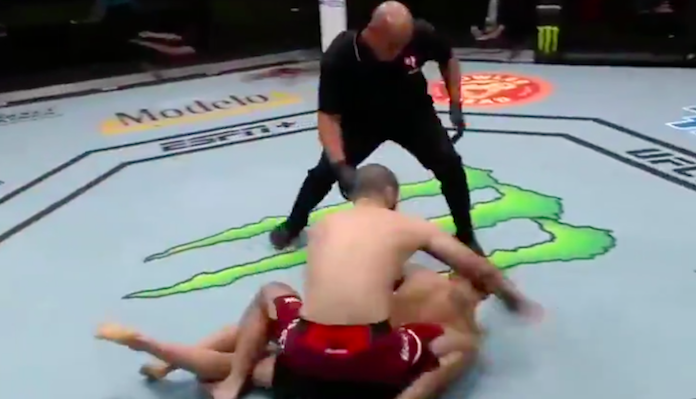 Zahabi was one of a number of underdogs who won in dominant fashion at UFC Vegas 19, as he was able to knock Rodriguez out in the first round with a vicious 1-2. What made the win even more impressive was the fact Rodriguez badly missed weight at the official weigh-ins on Friday, coming in at 140.5lbs for a 135lbs fight (plus the one-pound allowance). Because Rodriguez missed so badly, there were some whispers that Zahabi would decline the fight. However, Zahabi said that the UFC made him an offer he couldn’t refuse.

Speaking to the media following his brilliant victory, Zahabi said that he did consider turning down the fight with Rodrigue after he missed weight, but he decided to stick with the matchup after UFC matchmaker Sean Shelby offered him a new four-fight contract.

“There was a moment (I considered declining the fight) because listen, I don’t want to sound disrespectful or anything, but if you miss weight by 1 or 2lbs it’s somewhat understandable. But 4.5lbs? I found it kind of disrespectful towards me and my team and the UFC and everyone involved. Stuff happens, I’m sure he’ll get a pass on this one time. But it’s not professional. I try to come in here and do my work as a professional. And Sean Shelby made it worth my while to take the fight,” Zahabi said, confirming the new four-fight deal with the promotion.

Zahabi also mentioned that had Rodriguez showed up 5lbs overweight he would have seriously considered declining the bout. In the end, the UFC gave him a new contract and he went in there and got the job done with a big-time KO. Oh, and he ended up taking home a $50,000 bonus for his troubles. While it initially looked like a bad situation against a bigger fighter in Rodriguez, it turned out to be a good night at the office for Zahabi.

Who do you want Aiemann Zahabi to fight next after knocking out Drako Rodriguez?