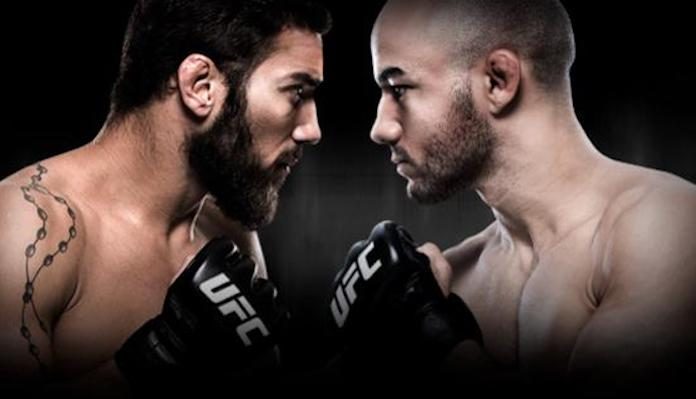 Unable to catch tonight’s UFC Fight Night 131 event in Utica? BJPENN.com has you covered! Stay glued to this page for up to the minute live results from all of tonight’s action.

UFC Fight Night 131 is headlined by a key bantamweight fight featuring top contenders Jimmie Rivera and Marlon Moraes, with the winner likely receiving the next shot at UFC bantamweight gold.

In the co-main event of the evening featherweights Gregor Gillespie and Vinc Pichel will battle with the winner inching closer to contender staus in the promotions stacked 145-pound division.

Get all of the UFC Utica Live Results below:

Jimmie Rivera vs. Marlon Moraes – Moraes def. Rivera via knockout in Round 1
Gregor Gillespie vs. Vinc Pichel – Gillespie def. Pichel via submission (arm triangle) at 4:06 of Round 2
Walt Harris vs. Daniel Spitz – Harris def. Spitz via TKO at 4:59 of Round 2
Jake Ellenberger vs. Ben Saunders – Saunders def. Ellenberger via TKO (knee and punches) at 1:56 of Round 1
Julio Arce vs. Daniel Teymur – Arce def. Teymur via in Round 3
Sam Alvey vs. Gian Villante – Alvey def. Villante via split-decision (29-28, 28-29, 29-28)