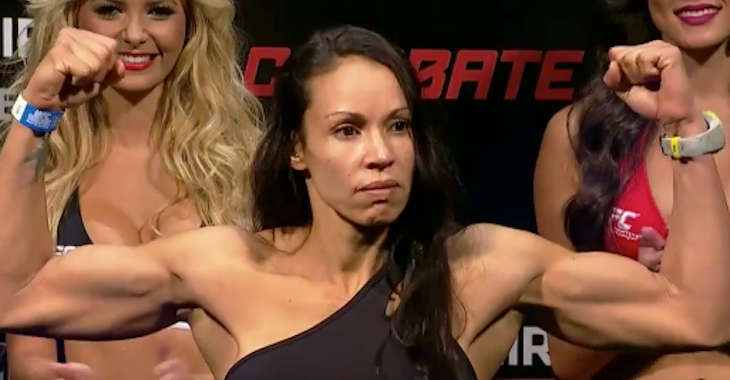 Round one begins and Reneau starts off quickly. She fires off a combination followed by a hard low kick. Marion utilizing some serious forward pressure early. She throws another low kick but Talita catches it and scores a takedown. She immediately attempts to pass the guard of Reneau. Marion is not having that. Bernardo with some punches from the top. Marion scrambles and attempts to sweep the Brazilian. She winds up on top but Talita drops for a heel hook. Marion escapes the submission and then rolls for an armbar. She transitions to a triangle choke. It looks deep. Talita remains calm and eventually escapes. She stays in top position to close out round one.

Round two begins and Reneua presses forward with a pair of left hands. Marion goes to the body with a jab. Talita fires back with a low kick. The Brazilian misses with a right and Reneua counters beautifully with one of her own. Talita is on the retreat now. She shoots in for a takedown but Marion stuffs it. Talita gets back up to her feet and is greeted by a left hand. Reneau connects with a gorgeous right hand over the top. She avoids a counter combination and then lands another right hand. Talita replies with a low kick and then a right hand of her own. Reneau continues to press forward. Talita shoots in but Reneau catches her with a left hand. Bernardo once again shoots in and this time she secures the takedown. 90 seconds remain. Reneau locks in a guillotine choke and uses the submission attempt to stand back up. Marion with a right hand over the top and then another. She pushes Talita against the cage and begins working some knees to the body. She switches to an elbow that lands flush. Uppercuts now for Reneau. She steps back and lands a huge right hand. Talita shoots in desperately. Round two comes to an end.

Round three begins and Talita immediately shoots for a takedown. She doesn’t get it but pushes Reneau against the cage. Marion tries to circles off the cage but Bernardo stays on her and scores a trip takedown. Talita with a huge elbow from the top. Reneau is bleeding now. Marion lock in a triangle choke. It appears to be deep. She transitions to an armbar and then moves back to a triangle choke attempt. Talita escapes and passes to half guard. Reneau is throwing shots from the bottom but she needs to get up. She locks in a guillotine choke and uses the hold to take top position. Reneau immediately moves to the back of Talita. She locks in a rear-naked choke. She has both hooks in. Talita somehow escapes. Reneau stays on her and begins dropping down heavy shots. She switches back to the rear-naked choke attempt. It is not there. More heavy shots from Reneau. The referee finally steps in and stops the mauling.

With just seconds remaining, Marion gets the stoppage. #UFCRotterdam pic.twitter.com/6PvkAb6m6P