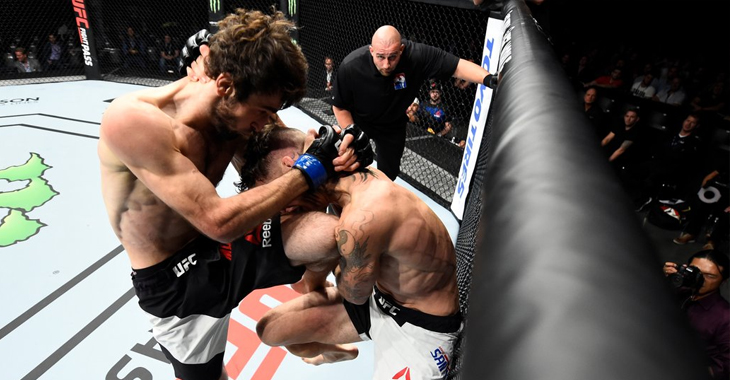 With that said, the UFC handed out three “Performance of the night” awards at this afternoon’s UFC Fight Night 115 post-fight press conference.

Performance of the night bonus – Mairbek Taisumov earned an extra fifty thousand for his one-punch knockout victory over Felipe Silva. Taisumov caught Silva with a viscous right hand while Felipe was coming forward and it was goodnight for the Brazilian. The victory marked Mairbek’s fifth in a row, with all five of those wins coming by way of TKO/knockout. The streaking lightweight wants a top ten opponent in his next octagon appearance.

Performance of the night bonus – Zabit Magomedsharipov earned an extra fifty thousand dollars for his electrifying octagon debut opposite Mike Santiago. Zabit threw a variety of wild and unorthodox strikes before eventually putting Santiago away with a second-round submission finish (rear-naked choke). This kid is definitely a fighter to keep your eye on!

Fight of the night bonus – Alexander Volkov and Stefan Struve each pocketed an extra $50K for their epic UFC Fight Night 115 main event. The hometown favorite, Stefan Struve, had a strong opening round which saw him stun “Drago” on a couple of occasions. However, by the end of round two it was clear that the tide was turning in Volkov’s favor. In round three, Volkov was able to connect with a right hand that sent Struve crashing to the canvas. “Drago” followed up with some ground and pound which forced the referee to step in and call a stop to the action.