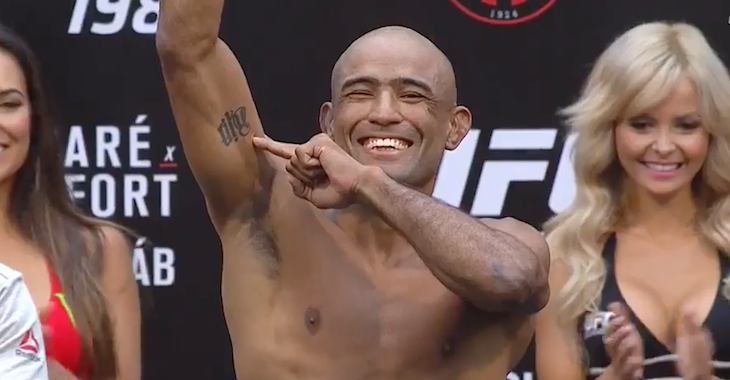 Round one begins and Chagas charges forward with a flurry of punches. He follows up with a body kick on Moraes. Sergio throws a wild right hand that misses. Chagas with a heavy leg kick that lands flush. He narrowly misses with a spinning back kick. Chagas with a quick jab and then a nice kick to the body. Another good leg kick by Chagas. Sergio Moraes replies with a leg kick of his own. Moraes lands a nice uppercut. Chagas continues to press forward. He lands a big inside leg kick on Sergio. Moraes misses with a wild right hand but lands a good follow up leg kick. Huge head kick lands for Chagas that drops Sergio. Chagas tells him to get back up. Moraes returns to his feet and seems to be ok. Straight left hand drops Moraes again. Chagas tells him to stand back up. Chagas finishes the opening round by landing a nice right hand.

Round two begins and Chagas lands a nice combo to start. Sergio Moraes with a big right hand. Good left hook scores for Sergio. Nick kicks and then a right hand from Chagas. Another good leg kick from Chagas. He misses with a spinning back kick attempt. Moraes is looking to land a big overhand right. Chagas with a knee. Good left hand from Moraes. Chagas eats a big kick from Moraes. He looks to be tired. Moraes senses it and presses forward. Chagas charges forward with shots. Moraes jumps in a and grabs a hold of Chagas’ neck. Guillotine choke is locked in. Chagas is able to fight his way out of the tight submission attempt. Chagas now working from full guard but it is Sergio landing the shots. The referee tells the fighters to stand back up. Chagas with a front kick to the body. He rushes in a lands a takedown. The fighters scramble and Moraes winds up in top position. Round two comes to an end.

Round three begins and Chagas misses with a left hand. Good shot lands for Moraes. Sergio shoots in and lands a takedown. He begins working some right hands from the top. Sergio moves to half guard. He looks to be searching for an arm-triangle choke. Chagas scrambles but gives up his back. Two minutes to go. Chagas scrambles and looks to set up a knee bar. He loses the submission hold and Moraes once again takes his back. Sergio searches for some submission openings but can’t land anything before the horn sounds to end round three.