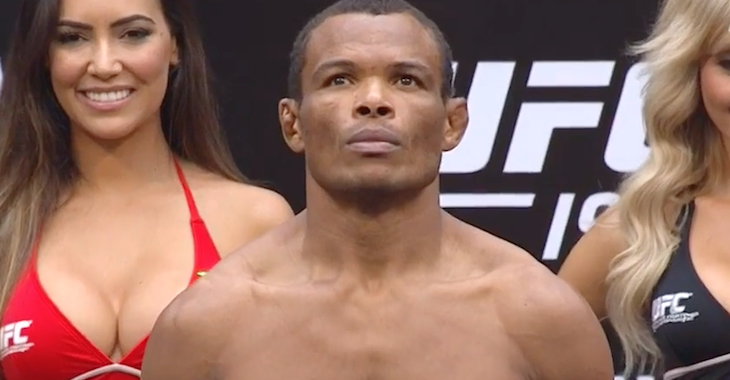 Round one begins and Yancy starts things off with a kick to the body. Trinaldo shoots in and gets a body lock on Medeiros. He presses the Hawaiian against the fence and begins working for a takedown. Yancy turns Francisco around and lands a knee to the body. Trinaldo replies with a nice knee of his own. The fighters finally break from the clinch position. Medeiros with a nice left hand. Yancy responds with a stiff jab. Trinaldo with a nice combination. He lands a left hand over the top. Trinaldo is throwing bombs. Medeiros is hurt. He throws a spinning back kick. Another massive shot lands for Trinaldo. Francisco is throwing all he has but Yancy won’t go down. Medeiros is saved by the bell and Trinaldo looks exhausted.

Round three begins and Yancy lands a front kick to the body of Trinaldo. Medeiros is working his jab. Trinaldo replies with a leg kick. Yancy catches the Francisco kick and lands a kick to the body. Trinaldo comes forward and lands a left hand and then follows that up with a hard body kick that stuns Medeiros. Trinaldo with a huge left. The fighters trade shots. This is a war. Trinaldo with a massive left hand. Yancy crashes to the floor. Trinaldo with punches and elbows from the top. Yancy is still fighting back and gets up to his feet. Trinaldo with another big left hand. He lands a knee that sends Yancy to the floor. Hammer fists from Trinaldo. He’s landing some lefts. Yancy stands up again. This is insane. The heart of Yancy Medeiros. The Hawaiian scrambles and winds up in top position. He begins working from full guard. He lands some good shots from the top as round three comes to an end.