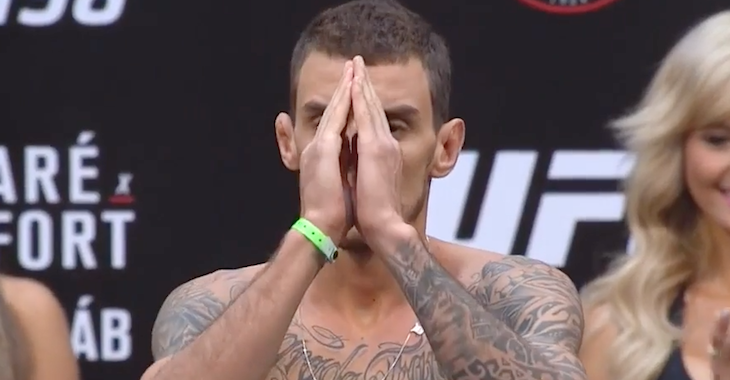 Round one begins and Renato throws a body kick that misses. Tukhugov is switching stances and comes in with a right. Good low kicks from Renato. Tukhugov charges forward with a left hand. The Brazilian lands a nice counter right hand. Tukhugov misses with a high kick but connects with a follow up side kick. Renato with a quick jab. He lands a nice leg kick but Tukhugov shoots in and lands a takedown. Moicano is utilizing the rubber guard technique from his back. He is trying to setup a triangle choke but Tukhugov pulls out and stands back up. Tukhugov tries to leap in to half guard but after a scramble Renato is on his back. Tukhugov is able to roll out of the position as round one comes to and end.

Round two begins and Renato lands a big shot. He follows up with a nice left jab. Tukhugov charges forward with punches but nothing lands. Renato begins chopping at the legs of Tukhugov with a series of low kicks. Renatoa appears to hit the Russian fighter with a low blow but the fight continues. Good left hook and then a kick to the body by Tukhugov. Renato with more leg kicks. He is pressing forward and lands a good left on Tukhugov. Both fighters exchange big shots. Tukhugov chargesd forward with some wild punches but nothing lands. Tukhugov attempts a spinning back-fist attempt but misses. Renato is landing some decent shots here. He is pressing the action while landing some good kicks as round two comes to an end.

Round three begins and Renato opens up with a leg kick. Tukhugov shoots in and lands a takedown but the Brazilian pops right back to his feet. Renato is walking him down here. Tukhugov comes forward with a body kick. Renato with a nice right hand that wobbles Tukhugov who shoots in for a takedown. Renato stuffs the attempt and throws a stiff jab. Tukhugov with a nice right hand. Renato is cut and the doctor is called in to take a look . After a brief stoppage the fight continues. Tukhugov is landing some good shots but he needs to throw more. Renato is walking him down but eating some shots in the process. Good body kick from Renato. He lands a leg kick on Tukhugov and then follows up with a nice combination. Renato with a spinning back kick and then a body kick. Tukhugov shoots in for a takedown but Renato stuffs it. Another good leg kick from Renato and the horn sounds to end round three.