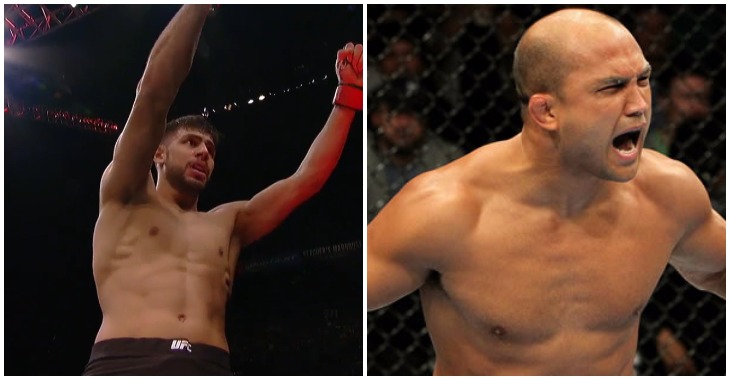 Wondering about the UFC Phoenix start time? BJPenn.com has you covered with all the details you need. Check out the rundown below.

The UFC Phoenix early prelims, finally, are scheduled for a 6:00 pm ET / 3:00 pm PT start time, and will air on UFC Fight Pass.

The card will be headlined by a compelling featherweight showdown between rising Mexican prospect Yair Rodriguez, and our very own BJ Penn.

Rodriguez will enter the fight having won his first five bouts in the Octagon. During this stretch, he has scored decisions over Leonardo Morales, Charles Rosa, Dan Hooker, and most recently, Alex Caceres. The undeniable highlight of his time in the Octagon, however, was a 2016 knockout of the year contender over Andre Fili. He’s 9-1 in sum.

Penn will step onto the canvas at UFC Phoenix having not fought since July of 2014, when he was TKO’d by an old rival in Frankie Edgar. Prior to that loss, he gave up decisions to top-10 welterweights in Rory MacDonald and Nick Diaz, fought Jon Fitch to a draw, and KO’d welterweight legend Matt Hughes. He’s 16-10-2 overall.

Now that you’re updated on the UFC Phoenix start time, here’s a quick rundown on the official lineup:

Will you be tuning in to watch BJ Penn’s comeback fight? Sound off, PENN Nation!