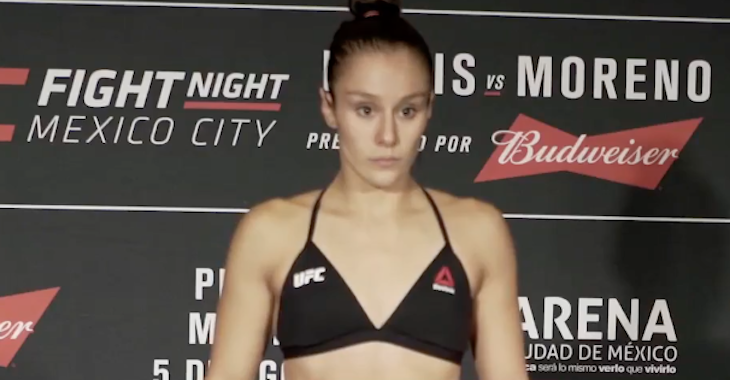 Round one begins and Grasso lands a kick to the body of Markos to start. Randa is circling looking for a way inside. Grasso with a nice left hand. Randa responds with a heavy right. Grasso eats it and fires off a low kick. Markos with another right hand. Alexa fires right back with a left. Randa leaps forward and lands a combination. She is scoring with a some big punches now. Randa pushes Alexa against the cage. She opts to let go of the clinch and begins to throw more leather. Alexa responds with a low kick. Randa with a right hand and then she circles out. Grasso presses forward and lands an outside low kick. Randa charges forward with a combination but nothing connects. Another good low kick from Alexa. Both women connect with left hands. Grasso with a left hook and then an uppercut. Randa might be stunned here. Grasso presses Randa against the cage and begins working some knees. Randa is bleeding. Grasso gets the fight to the floor and begins working some ground and pound. She takes the back of Markos. Randa scrambles and gets back to her feet. She presses Grasso against the cage. Grasso switches the position and lands some knees. Randa reverses and lands a left hook. The ladies break and round one comes to an end.

Round two begins and Grasso lands a left kick to the body. Randa charges forward with a combination. She shoots in for a takedown but Alexa reverses and winds up on top. Both ladies are back on their feet now. Randa has double under hooks and drags Grasso to the floor. Alexa quickly scrambles and gets back up to her feet. The fighters briefly clinch and then break. Grasso pumps a left jab and then a lands a low kick. She throws another kick but Randa catches it and then scores a trip takedown. Randa is working from half guard. She lands a nice elbow. She works some short shots to the body before Grasso is able to scramble back to her feet. Grasso with a kick to the body. She throws another and once again Randa catches it and scores a takedown. She winds up in mount but Grasso scores a beautiful sweep and winds up on top. Another reversal and Markos is suddenly back in full mount. She begins raining down some massive elbows. Absolute violence from Markos here. Grasso scrambles back to half guard. Round two comes to and end.

Round three begins and Markos lands a right hand. Alexa fires right back with a left. Markos is looking to find her way inside. She charges forward with a combination. Alexa covers up and then circles out. Grasso with a left. Randa with a right. She shoots in and lands a knee from the clinch. The fighters break and Grasso lands a right hand. Randa shoots in and scores a takedown. That is huge for Markos. She works in an elbow from full guard. A good left hand now from Markos. Grasso is able to kick Markos off of her and get back to her feet. She presses forward and lands a right hand. Markos circles and then switches her stance. Alexa misses with a right hand, so does Randa. Markos charges forward and lands a knee. One minute remains. Randa shoots in but Alexa wraps up a guillotine choke. Randa gives up on the shot and then eats a right hand. Alexa with a left and then a right. Markos shoots in for a takedown but it is not there. Round three comes to an end.