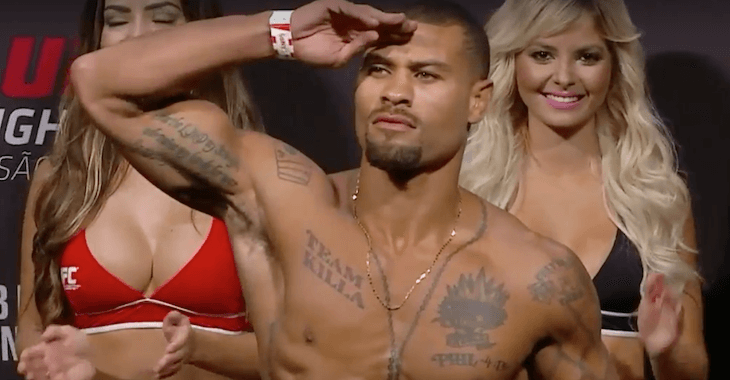 Unfortunate news surfaced this week that three fighters who competed on February’s ‘UFC Fight Night: Korean Zombie vs. Dennis Bermudez’ card have all been suspended and fined for failing fight night drug tests for marijuana.

According to MMAFighting, Niko Price, Curtis Blaydes, and Abel Trujillo have all been suspended 90 days and fined $1000 by the Texas Department of Licensing and Regulation for the infraction, however USADA spokesman Ryan Madden has revealed that none of the fighters will be penalized by USADA given the fact that all of the men had less than 150ng/ml of marijuana metabolites in their system in samples collected.

Unfortunately, this means both Niko Price and Curtis Blaydes have had their wins overturned to ‘no contests’ given the drug testing failures.

Blaydes picked up a dominant 2nd round TKO win over Adam Milstead, who he repeatedly slammed to the canvas throughout the first round, injuring Milstead’s knee to the point that he was unable to fight. The win made it two straight for Blaydes, who now will be looking to once again build on his 2016 win over Cody East the next time he steps into the Octagon. Price also had his win overturned to a ‘no contest’, he picked up a 2nd round KO win over Alex Morono on the UFC Fight Pass preliminary portion of the card, however he too now has a ‘no contest’ on his record.

Abel Trujillo is the only man on the list who was not victorious in their fight. Trujillo fought James Vick on the main card portion of the Fox Sports 1 televised event, and was handed a 3rd round submission loss, snapping a 3-fight win streak that had seen him pick up several impressive wins in a row before being submitted by the ‘Texecutioner’ in February.