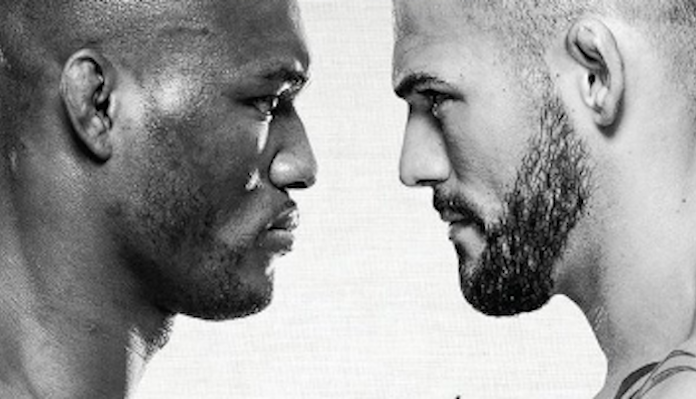 On May 19, the UFC will touch down in beautiful Santiago, Chile, with an exciting Fight Night card. As this event draws closer, the promotion has dropped the official UFC Chile poster, which includes the four fighters competing in the main and co-main events.

As you can see, the UFC’s debut in Chile will be headlined by a clash of top-10 welterweights, as American wrestling specialist Kamaru Usman collides with Argentine striker Santiago Ponzinibbio.

Usman will enter this fight on an impressive 11-fight win-streak. The seven most recent victories of this streak have occurred in the UFC’s Octagon, where he’s defeated game foes like Leon Edwards, Sean Strickland, Sergio Moraes and Emil Meek. He’s 12-1 in sum.

Ponzinibbio, meanwhile, is on a 6-fight streak, having not lost since a 2015 TKO dealt by current Bellator star Lorenz Larkin. This streak is composed of wins over Andreas Ståhl, Court McGee, Zak Cummings, Nordine Taleb, Gunnar Nelson and most recently, “Platinum” Mike Perry. Ponzinibbio is 26-3 in sum.

This bout will mark Oezdemir’s opportunity to rebound from a failed title bid opposite reigning champ Daniel Cormier. Prior to this loss, he knocked out out Jimi Manuwa and Misha Cirkunov and defeated Ovince Saint Preux by decision in his first three bouts in the Octagon. He’s 15-2 overall.

Shogun, meanwhile, owns an overall record of 25-10. He will enter this fight on a 3-fight win-streak, composed of decisions over Antonio Rogerio Nogueira and Corey Anderson, and a thudding, third-round TKO victory over the gritty Gian Villante. Shogun won the UFC light heavyweight title with a 2010 knockout over Lyoto Machida, but lost it in his first defense, a 2011 bout with Jon Jones.

What do you think of the UFC Chile poster?