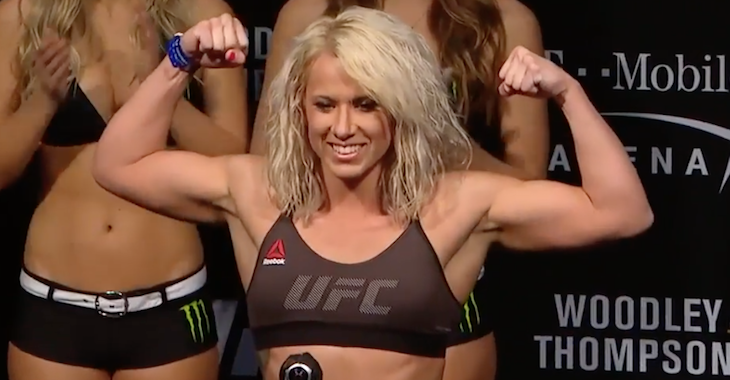 Round one begins and Cooper immediately takes the center of the octagon. Magana lands a nice leg kick and then another. Cooper lands a left hand and then a right over the top. Magana fires back with a crisp jab. Amanda switches to southpaw and then right back to orthodox. Amanda with a nice jab. Magana throws a kick but Amanda catches it and presses her against the fence. Cooper with a takedown attempt but Magana clearly grabs the fence and stays up. More pressure from Cooper and she gets Magana to the floor. Amada immediately moves to mount and then transitions to the back of Magana. Angela rolls and Cooper winds up on top and in half guard. Magana scrambles and gets back to full guard. A big elbow now from Cooper. She moves into half guard and lands a pair of left hands. She traps one of Magana’s arms and begins raining down punishment. Cooper takes Magan’s back and locks in a choke. She lets go and begins working in more shots. Somehow Magana is able to survive round one.

Round two begins and Cooper lands an early combination. She presses Magana against the cage and scores a takedown. Amanda is in full guard and begins working some elbows and left hands. Cooper moves to half guard and works in some more left hands. Cooper once again takes Angela’s back and locks in a rear-naked choke. It is deep. Somehow Magana survives and breaks free. Amanda lands a right hand. Another big right and she now has Angela flattened out. Magana is just being dominated here. Cooper again with some big strikes. She is trying to stop this fight. She lands a big left and then a right. Magana is showing off her toughness but not much else. Cooper with some big punches from the back of Magana. The referee has finally seen enough and stops the fight.

THERE IT IS!@ABCNation115 dominates from start to finish! #UFC218 pic.twitter.com/KPfm8gBX2P