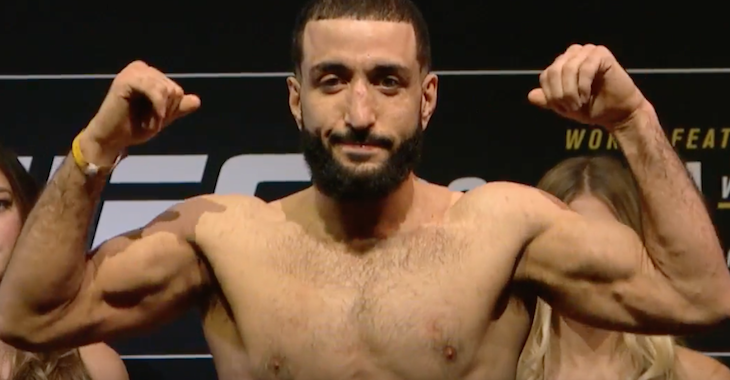 A welterweight bout between Randy Brown and Belal Muhammad served as the featured bout of tonight’s UFC 208 prelims in Brooklyn.

Round two begins and Belal continues his assault with some hard leg kicks. He presses Brown against the fence and begins working some solid knees to the thigh. Brown is able to break free and begins working his jab. He is circling well now and lands a nice right hand. Belal is bleeding but continues to use some hard forward pressure. He lands a kick to the body on Randy and then shoots in for a takedown attempt. He gets the fight to the floor and immediately takes the back of Brown. Belal locks in both hooks and begins raining down some hard shots from the top. More big hammer fists from Muhammad. Brown tries to scramble but can’t shake off Belal. Round two comes to an end.

Round three begins and Belal moves in quickly. Muhammad lands a hard leg kick. He grabs a hold of Brown and drags him to the floor. He begins working some solid ground and pound. Randy scrambles but gives up his back. Belal begins softening Brown up with some good shots from the back position. He locks in a body triangle and continues to work some short shots. Belal is searching for a rear-naked choke now. He cannot lock in the submission and so he switches to some short shots. Brown scrambles and winds up in top position. He lands a big right hand. Belal scrambles but eats another hard shot. Brown throws some more ground and pound but the horn sounds to end round three.