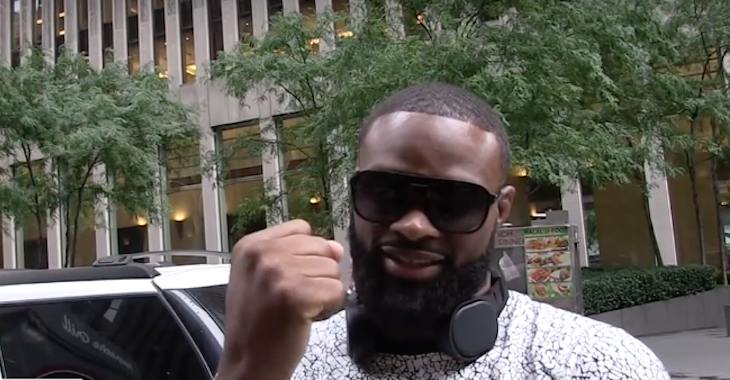 Earlier this year, in the main event of UFC 201, Tyron Woodley smashed Robbie Lawler to win the UFC welterweight title. Shortly after this massive win, it came time for the new champ to set his sights on his first defense.

From a rankings standpoint, there could be no other option for that first defense than the streaking Stephen Thompson. When Thompson’s name came up, however, Woodley made no secret of the fact that this prospective fight didn’t really interest him.

We know that this was, in part, because Woodley was more interested in lucrative showdowns with stars like Georges St-Pierre and Nick Diaz. Yet Woodley’s disinterest in fighting Thompson also stemmed from the fact that, not long before his fight with Lawler, Thompson suggested he’d prefer a fight with Lawler than one with Woodley.

This, unsurprisingly, rubbed the champ the wrong way.

Eventually, however, Woodley accepted a fight with Thompson. The two will share the co-main event spot of UFC 205, in New York City on November 12. Yet the champ still isn’t especially keen on his upcoming foe.

As Woodley explained on a recent episode of WFAN’s Outside the Cage, he finds Thompson to be somewhat two-faced.

“I just don’t respect when someone’s not keeping it 100,” he said on the show. “When you say one thing in front of my face, and you say something behind my back that’s different, or you get on the television and you’ve got these crazy remarks, but then earlier today we’re doing this conference, and he was so complimentary—I don’t like that. Just be one way the whole time.”

“I want him to live up to the words he said, and I want him to be a man,” Woodley continued. These words that I’m saying, you said these words. You said that if I was back stage that you’d basically say, ‘oh man, come on, you’ve been champion for 30 seconds.’ You said that ‘I dunno what Robbie Lawler was thinking, why did he let him do that.’ You also said you’d prefer to fight him over me, not if he won or if I won. You put those things out there. Now you’re in my face at the press conference, and I want you to live up to those words, because it’s not paraphrased, it’s actually quotations that he actually said. I just want him to own it.”

Despite Thompson’s incredible striking skill, Woodley also expressed his confidence that he can knock his upcoming challenger out.

“[Matt Brown and] Jake Ellenberger caught him, and none of those guys’ IQs are very high in the Octagon, so they should have finished him off,” Woodley explained. “Any time I hit somebody, they hit the ground. There’s only been one time in my life where I’ve never got the job done. So if he hits the ground, the fight’s over with.”

Do you understand Woodley’s criticisms of Thompson? Do you think he’ll  be able to knock him out at UFC 205? Sound off, PENN Nation!