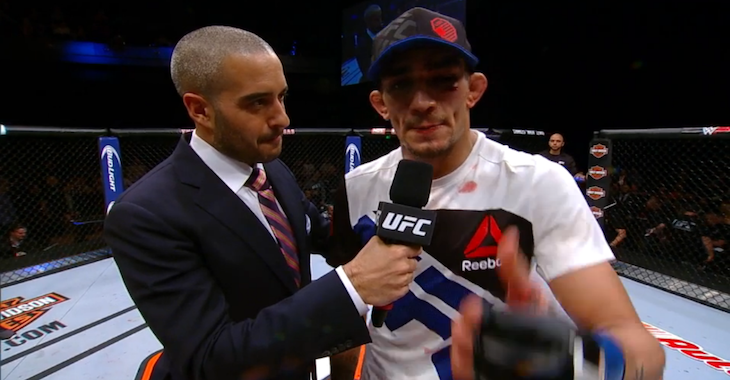 Friday afternoon, unfortunate news surfaced that prior to his co-main event interim lightweight title fight with Tony Ferguson, Khabib Nurmagomedov had been taken to the hospital by his team.

Unfortunately, after receiving an IV, Nurmagomedov was forced out of his scrap with Tony Ferguson. While the promotion initially looked to find ‘El Cucuy’ a replacement opponent, they chose to pull him from the card as well after he turned down a short notice fight with Michael Johnson, the last man to defeat him.

In addition, former UFC lightweight champion Eddie Alvarez, and fellow UFC 209 fighter Lando Vannata, who fought Ferguson on short notice in the past, both offered to step in on short notice.

After the UFC pulled Ferguson, Johnson took to social media to inform him that he was ready to fight. Ferguson then explained why he turned down the short notice fight with the last man to defeat him, saying:

I was ready and willing!! To make that title weight for last minute. Unfortunately @TonyFergusonXT declined it. Catch ya around next time!

Respect For Your Willingness To Step In. @Ufc Told Me It Wasn't For The Title And It Was For Less Pay. Willing To Fight You For Right Price https://t.co/cSGspjZUei

Interestingly enough, UFC President Dana White revealed yesterday following Nurmagomedov’s withdrawal that he could have remained on the card had his team not gone “rogue” and taken their fighter to a random Las Vegas hospital. “Basically, his team had decided to take him to just some random hospital here in Las Vegas instead of picking up the phone and calling our doctor and calling Brianna [Mattison], who runs all the medicals,” said White earlier tonight (Fri., Mar. 3, 2017) during UFC 209’s weigh-in show. “They went rogue and went out and did their own thing. Had they done this thing the right way, the fight probably could have been saved.”

Unfortunately, now fight fans will have to wait for news on whether the UFC plans to attempt to re-book this fight once again, or chooses to give both men different fights.