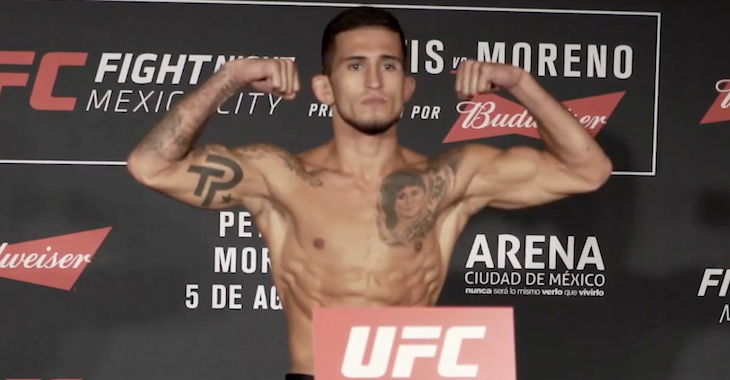 Round one begins and Moreno misses with an attempted low kick to start. He fires off another that lands. Moreno catches a Pettis low kick and uses that to score an early takedown. Moreno working from full guard here. Pettis traps an arm. Moreno pulls it free. Pettis scrambles but gives up his back. Moreno takes the back and locks in a body triangle. Brandon is looking for a rear-naked choke now. He switches to some punches and then resorts back to working for the submission. Pettis is able to avoid the choke. Moreno switches to punches. Pettis attempts to scramble but Brandon stays on his back. Brandon is working some strikes from the back. Ten seconds remain. The horn sounds to end round one.

Round two begins and Pettis lands a good kick to the body of Moreno to start things off. Brandon leaps in with a left hook that misses. Pettis with a nice low kick. He is pressing the action now. Moreno misses with a high kick attempt. Pettis catches a kick and trips Moreno. Brandon tells him to come to the floor but Sergio tells him to stand back up. Brandon does and Pettis lands a high kick. Another head kick from Pettis. Moreno shoots and gets the takedown. Pettis immediately locks in a triangle choke. Moreno escapes but Pettis is on his back now. Moreno shakes him off and breaks free. Both men miss with front kicks. Pettis lands another hard head kick. How is Moreno eating these? Pettis continues to press forward and lands a jab. Both men are standing in the pocket and trading now. Pettis just misses with a spinning head kick. Round two comes to an end.

Sergio Pettis put in work in round two! #UFCMexico https://t.co/GFdfY3z8qE

Round three begins and Pettis lands another high kick. He follows that up with a kick to the body of Moreno. Sergio is applying a ton of pressure now. He lands another hard kick on Moreno. Pettis lands a kick and then a right hand. Moreno looks stunned. Pettis with a left hook now. He is getting off on Moreno at will here. Brandon shoots in for a takedown but it is not there. Moreno with a low kick. Pettis lands a right and then a left. Moreno circles and then eats a low kick. Another shot from Moreno but Pettis stuffs it easily. Pettis continues to press and lands a right hand. Moreno responds with a head kick of his own but it is partially blocked. Pettis with a right hand that opens up a cut on Moreno. The horn sounds to end round three.

Round four begins and Pettis comes forward with a high kick. Moreno blocks it and circles out. Pettis with a left jab. Moreno responds with a kick to the body. Sergio switches his stances and then leaps in with a right. Pettis with an accidental eye poke. The referee steps in and calls for the doctor to take a look. After a brief break in the action we restart. Pettis comes forward. He lands a left and then a right hand. Pettis goes upstairs with a high kick. Moreno circles but Pettis catches him with a side kick. Moreno is busted up now. Still, the tough kid from Mexico continues to stand and bang. Pettis catches him with jab and then another. Pettis leaps in with a knee the connects. Moreno eats in and fires off a right hand. Sergio avoids a combination and counters with a right hand. Moreno fires right back with a right of his own. One minute remains in round four. Pettis with a spinning high kick that just misses the mark. He lands a stiff left jab. Moreno presses forward. Pettis throws a cartwheel kick. Moreno avoids and gets him to the floor. The horn sounds to end round four.

Round five begins and Moreno immediately shoots in and scores an early takedown. He begins working from full guard position. Pettis throws up his hips and looks to secure a submission. Nothing is there. Moreno is being told he needs to do something by the referee. He postures up and Pettis lands a pair of up-kicks. Moreno with some nice shots form the top. Pettis replies with some good short shots from off his back. Two minutes remain. Moreno is looking to move to the back of Pettis. Sergio is able to shake him off. We are back to standing with one minute to go. Pettis lands a kick to the body. He misses with a left hand. Pettis with a right hand now. He lands a spinning back kick. Moreno is circling. Pettis charges forward with a combination. The horn sounds to end round five.