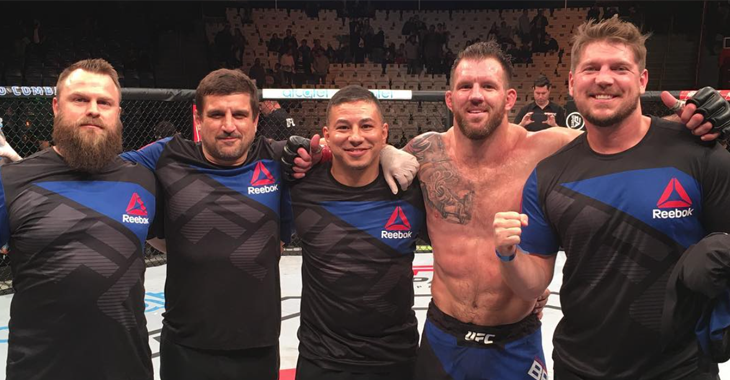 Ryan Bader is one of the noteworthy fighters that jumped ship from the UFC to Bellator MMA recently. With going through the negotiation process between the two major mixed martial arts promotions, Bader ultimately felt like he would be better off changing things up and signing with Bellator.

A big factor in Bader’s decision to sign with Bellator surely had to do with the amount of money he could make with his personal sponsorships. With the UFC tied into an exclusive uniform deal with Reebok, many UFC fighters such as Bader lost out on a lot of money from their personal endorsements. Even with Bader being nearly at the top of the Reebok pay structure with having 20 fights in the UFC, “Darth” was making $15,000 per fight from Reebok. Now with the opportunity to wear his sponsors out to the Bellator cage, Bader says he will be bringing in a significant amount more in comparison to his Reebok pay.

“It will be three to four times what I was getting with Reebok, for sure,” Bader said in an interview with MMAjunkie. “I had a couple really good blue-chip sponsors that have stood by us through the whole Reebok deal that are still there – like the American Ethanols and things of that sort. Then we got some new sponsors coming on board. We’re full for this fight.”

With the UFC being the biggest MMA promotion, some believed Bader and other fighters coming from the UFC would have a hard time negotiating lucrative sponsorship deals. However, that has not been the case for The Ultimate Fighter season eight winner.

“People are like, ‘Oh, you’re in Bellator, so it’s going to be harder to find sponsors,’” Bader said. “That wasn’t the case at all. There’s more opportunity in that aspect, and we’re full. I’m getting much more money than I was in the UFC in sponsorship revenue. I’m feeling good, I’m excited, and I’m happy to be in Bellator. I’m coming for the belt, and I can’t wait. I’m going to make the best of it.” Ryan Bader will make his Bellator debut in a title fight against the light heavyweight champion Phil Davis at Bellator 180 on June 24. Bader will look to pick up another win over Davis as the two fought previously in the UFC back in 2015 where Bader was awarded a split decision victory.

Who are you picking to win the Bellator light heavyweight championship fight between champion Phil Davis and challenger Ryan Bader? Give us your prediction in the comment section!