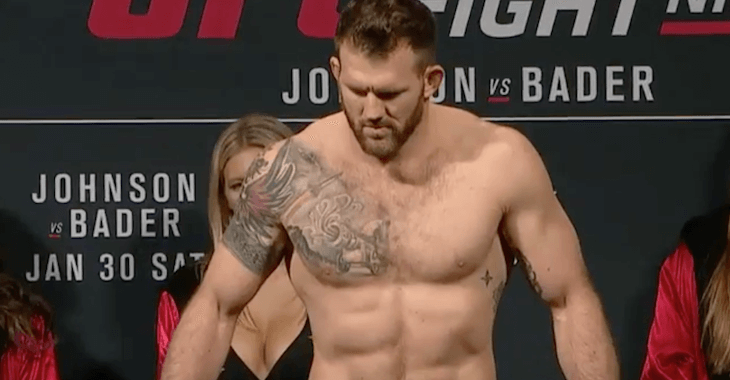 It was a tough pill to swallow for Ryan Bader. After campaigning hard for a shot at the UFC light heavyweight title on a five-fight win streak, Bader was put to the test before getting a title fight and met the hard-hitting Anthony Johnson in the main event of UFC on FOX 18 on Saturday night.

After a failed shot in for a takedown by Bader, Johnson was able to control Bader on the ground and secured the mount position and poured on heavy shots causing referee Keith Peterson to stop the bout at 1:26 of the opening round.

Bader released a message to his fans on Facebook that read:

“Well fight obv didn’t go as planned, took a stupid shot and ended up paying for it. It is what it is. You keep playing it over in your head, but that doesn’t change the outcome. Worst part, is that feeling of not fighting to your potential. I just need to make fighting fun again. Congrats to AJ.

That being said, I have a beautiful family, great friends, and amazing fans that have stuck by me no matter what, so nothing to be down about. love you guys!”

It wasn’t the outcome that fans of Bader were looking for, but that is the reality of the fight game. However, with a few impressive performances from Bader in his next bouts, it will only get him right back in line for title contention.

For now, it looks like Anthony Johnson may have made a statement big enough with that quick finish of Bader to warrant another shot at the title. Johnson will likely meet the winner of the fight between the current light heavyweight champion Daniel Cormier and former champion Jon Jones.

Who do you think Ryan Bader and Anthony Johnson will be matched up in their next fights? Share your thoughts on the potential matchups and how you see them going in the comments!