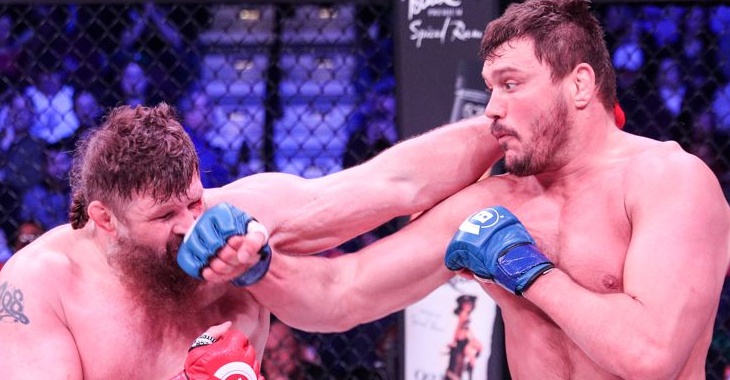 The fight may be over, but the war of words appears to be far from it.

As the Bellator Heavyweight Grand Prix continues on, it does so without Roy ‘Big Country’ Nelson as he was defeated by Matt Mitrione at Bellator 194 in their rematch of a 2012 UFC bout. But the result didn’t come without some controversy.

Mitrione would get the nod via majority decision with the last round being a questionable 10-8. Something that Mitrione blames Nelson’s cheating as the reason why.

When speaking with MMAJunkie recently, Nelson fired back at his rival:

I want Round 4, so we can go ahead and do that again. The worst-case scenario is we should’ve went to a fourth round. That was worst case scenario. [Referee] Dan [Miragliotta] was going to call the fight like three times. I got it in my head because I started having an argument with Dan about how Matt’s not moving and he couldn’t get out. He took a lot of unanswered shots.”

With Mitrione moving on in the tournament, he will now face the winner between Nelson’s teammate, Muhammad ‘King Mo’ Lawal and current Bellator light heavyweight champ, Ryan Bader. Their fight takes place at Bellator 199 on May 12th.

For Nelson, he now is set for another rematch against a fighter he previously defeated in the UFC. This time against the heavyweight legend, Mirko Cro Cop. But he still has interest in fighting Mitrione one more time…

“My goal is to beat up Cro Cop and then hopefully beat up Matt again and then get back in the tournament. I don’t know what I want more, the tournament or Matt. They’re both good. There’s Cro Cop, and there’s also Rampage Jackson, who didn’t want to fight. There are so many people that I actually want to fight now.”

Cro Cop last fought in December of 2017 when he defeated Tsuyoshi Kohsaka by knockout in just sixty-two seconds. He currently rides an eight-fight win streak which happens to be the longest of his career. His previous longest was seven from April 2004 to June 2005 in Pride.