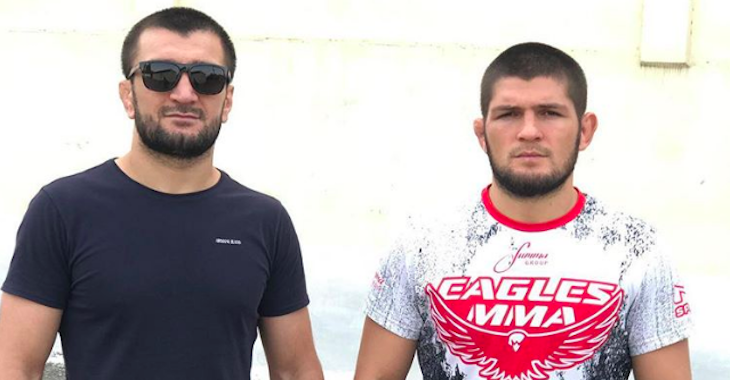 Abubakar Nurmagomedov has been removed from this bout for “unknown reasons” per Raphael Marinho of Combate. Sergio Moraes is now expected to battle Tim Means.

“Change of opponent for Serginho Moraes at UFC Belem, Brazil,”Marinho said. “[Moraes] had a verbal agreement to fight against Abubakar Nurmagomedov, will face Tim Means the day on February 3. Still no info on reason for replacement.”

Earlier this week, news broke that Abubakar Nurmagomedov, the cousin of undefeated lightweight star Khabib Nurmagomedov, had signed with the UFC. While it was clear from the get-go that the younger Nurmagomedov would make his debut on the UFC’s planned February 3 trip to Belem, Brazil, however, it was not immediately clear who is opponent would be.

Now we know we who he’ll fight in his UFC debut. According a report from Combate, Abubakar will collide with dangerous Brazilian grappling specialist Sergio Moraes on the undercard of this UFC Belem event.

Moraes is pretty much as tough a welcome committee as you’ll get in the perilous UFC welterweight division. Though he was knocked out by the surging Kamaru Usman in his last fight, this loss was preceded by a seven-fight unbeaten streak, highlighted by a first-round submission defeat of Neil Magny, and a TKO of Nurmagomedov’s countryman Omari Akhmedov. Moraes is 12-3-1 in sum.

While Sergio Moraes is a tough test for any UFC debutant, Abubakar Nurmagomedov will enter the cage with tons of momentum behind him. He’s won his last six fights, five of which occurred in the World Series Fighting cage, where he most notably defeated UFC veteran John Howard. Now 14-1 overall, Nurmagomedov’s lone loss came in 2014, when he stopped by punches dealt by current UFC lightweight Magomed Mustafaev.