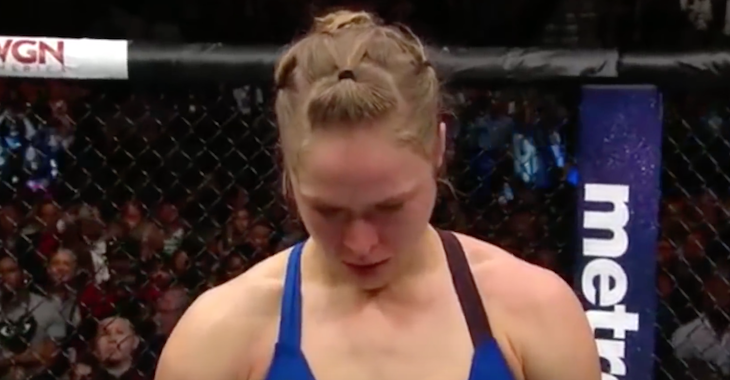 Ronda Rousey discusses her UFC losses: “One thing my mother never taught me was how to lose.”

Ronda Rousey entered the UFC octagon for the first time at UFC 157 in February of 2013 where she squared off Liz Carmouche for the promotions bantamweight title in Anaheim, California.

Just as she had done in her previous six wins, “Rowdy” would score a first-round submission victory (armbar) over Carmouche at the event, thus defending her UFC bantamweight title for the first time.

Ronda Rousey would go on to win her next five fights in a row, which included wins over Miesha Tate, Sara McMann, Alexis Davis, Cat Zingano and Bethe Correia, improving her overall record to a perfect 12-0 which included eleven first-round stoppage victories.

By this point in her career Ronda Rousey was not only a massive star but also a household name. While “Rowdy” was still snatching limbs from various women’s bodies inside of the octagon, she was also starring in commercials as well as some blockbuster Hollywood movies during her spare time.

Rousey appeared to be untouchable, drawing comparisons to the dominance shown previously by a young Mike Tyson in boxing.

However, that was all about to change.

In the summer of 2015 the UFC announced that Ronda Rousey would be defending her UFC women’s bantamweight title against former boxing champion Holly Holm at November’s UFC 193 event in Melbourne, Australia.

“The Preachers Daughter” would go on to end Ronda Rousey’s streak of invincibility at UFC 193, this after landing a devastating head kick in the second-round of their main event title fight. Following her rather shocking first career setback at the hands and feet of Holly Holm, Ronda Rousey would take over a year off before making her highly anticipated octagon return.

When “Rowdy” did return to action, she was given an immediate title shot against current UFC title holder Amanda Nunes.

Rousey proved to be no match for “The Lioness” in their title fight at UFC 207, suffering a lopsided TKO loss in just 48 seconds.

After suffering two devastating losses in a row, Ronda Rousey went MIA. She refused to do any media interviews and basically shunned outlets for an entire year.

Thankfully, Rousey recently emerged from the shadows and in to the spotlight of the World Wrestling Entertainment (WWE).

“Rowdy” signed a multi-year deal with the professional wrestling entertainment promotion and has since made her successful WWE debut on the grand stage of Wrestlemania where she submitted Stephanie McMahon.

During a Q&A session at the Wild Card West boxing gym earlier this week, Ronda Rousey told the public that she cried for nearly two straight years.

“I did a whole lot of crying, isolating myself, (my husband Travis Browne) held me and let me cry and it lasted two years,” Rousey said, per MMA Junkie. “I couldn’t have done it alone. There’s a lot of things you have to remember. Every missed opportunity is a blessing in disguise. I had to learn from experience. From the worst things, the best things have come as a result. Time is a great teacher. It’s that belief that time passes, even bad times.”

Rousey explained that her mother never taught her how to lose while admitting that she never actually thought she might lose in the octagon.

“My parents expected me to be special, so I expected to be special,” she said. “I was just trying to create the job I wanted, and I wouldn’t have the audacity to do that if my mom didn’t tell me I could. But one thing my mother never taught me was how to lose. She never wanted me to entertain it as a possibility. She’d say: ‘Let it suck. It deserves to suck.’”