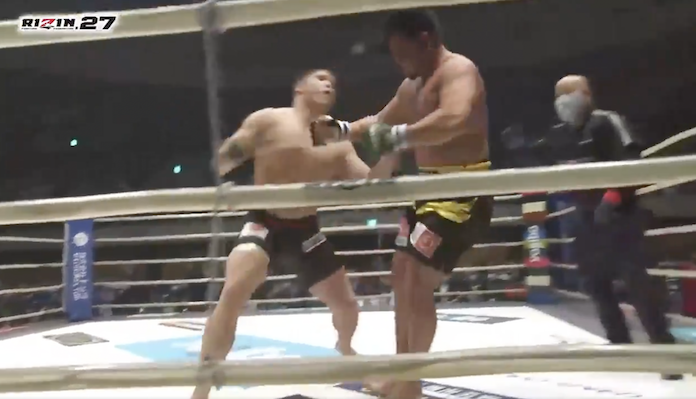 Sudario is a 23-year-old native of Japan who comes from a sumo wrestling background who trains MMA under the legendary Enson Inoue. In September 2020, he made his pro debut in mixed martial arts and finished Dylan James via first-round TKO (doctor stoppage) at RIZIN 24. He then returned to the cage at RIZIN 26 in December 2020 and finished Minowaman with strikes in the first round. Considering his young age, his grappling credentials, and his apparent knockout power on the feet, Sudario looks like a really good prospect. And if you thought he was already looking good, imagine what you might think now after the youngster just pulled off scoring the fastest in company history at RIZN 27.

Sudario needed just six seconds to finish Kazushi Miyamoto with punches to become the new record-holder for the fastest knockout win in RIZIN history. Watch the KO below.

Records being broken left and right! Sudario breaks the record for the fastest KO in RIZIN history, scoring a 6-second KO win against Miyamoto!

Even though Miyamoto isn’t an established MMA fighter, the fact that Sudario was able to go in there and finish him in just six seconds is a quality win no matter what way you look at it. It was an exceptional knockout win for Sudario, who looks to be a promising young prospect in the RIZIN heavyweight division. With three wins in MMA since making his professional debut just six months ago, he’s well on his way to becoming a special talent in the RIZIN organization, and someone who all MMA fans need to keep their eye on. There is so much talent all over the world these days, including a top prospect such as Sudario.

What do you think of the KO win by Tsuyoshi Sudario over Kazushi Miyamoto at RIZIN 27?