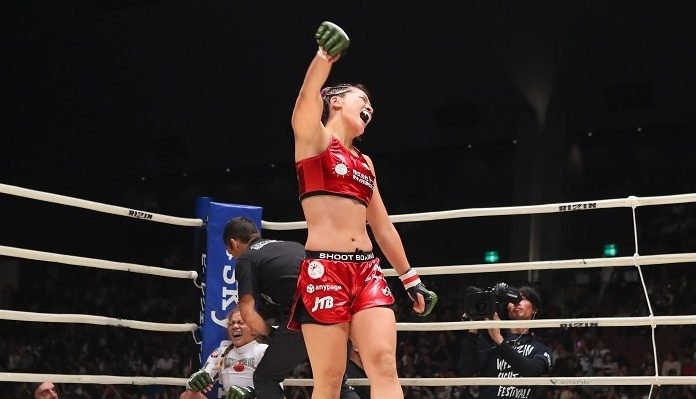 Crossing through the end of July to the beginning of August, the RIZIN Fighting Federation put on two successful shows in two weeks.

After a huge and wildly entertaining show with RIZIN 11 on July 29th at the famous Saitama Super Arena, RIZIN 12 followed on August 12th but was in a much smaller venue.

This, of course, didn’t take away from the action that went down, but there was a reason for trying out the smaller Aichi Prefectural Gymnasium in Nagoya that held an audience of 5567 rather than heading back to Saitama.

“I think that we should be able to do with [a] Big RIZIN, Middle RIZIN, Small RIZIN’s. ‘New Three Arrows’ next year, Big and Middle are about four times a year, Small is even monthly It is good.

Sapporo, Tohoku, Osaka…there are areas where there were no large or venue that we could not go easily, but if there is a gymnasium in Japan, there will be areas in Japan so we can also go to areas that we have not been able to go so far I can give opportunities to young athletes and I hope to hold a middle RIZIN of 5000 people scale as a place where various challenges can be held.”

More MMA is never a bad thing. And with this idea and RIZIN’s progression, it will only continue to grow. In 2015 they started with two shows then doubled with four the following year. Five took place in 2017 as well as 2018 (so far). With the ‘New Three Arrows’, quadruple the RIZIN events we’re already getting looks to be likely for the future.

Just from the sounds of it, the big RIZIN events will look like what we’re used to seeing in the Saitama Super Arena that can hold audiences of 20,000+ like seen at RIZIN 11 or their big New Year’s Eve events.

The middle tier events will be similar to RIZIN 12 while the small ones will be in an arena that holds likely somewhere around 1000 people.