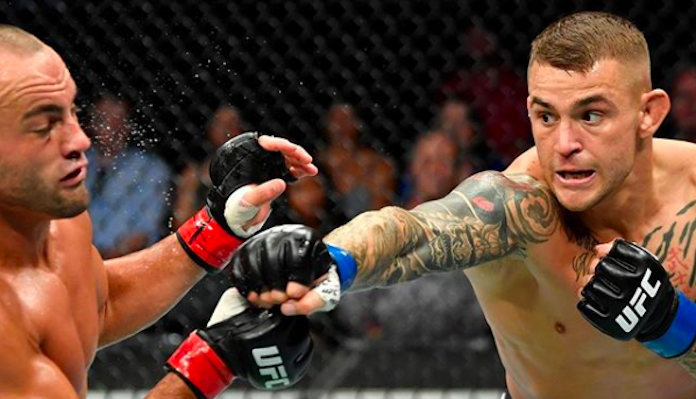 On Saturday night, in the main event of UFC on Fox 30 in Calgary, Alberta, Canada, surging lightweight contender Dustin Poirier and former champion Eddie Alvarez stepped into the cage for an anticipated bloodletting. The bout marked a do-over of an action-packed 2017 contest that unfortunately ended as a no-contest when Alvarez landed an illegal knee and Poirier could not continue.

The pair’s rematch was no less thrilling than their first bout, as they pelted each other with heavy artillery and threatened one another with tight submissions to the roars of a frenzied Cowtown crowd. In the end, however, it was Poirier who came out on top, bludgeoning his decorated foe with a storm of punches and knees in the second round.

Unsurprisingly, this massive victory from Dustin Poirier generated some interesting reactions from the MMA community.

Here are a few of the best reactions to Dustin Poirier’s huge victory over the former champion Eddie Alvarez.

All questions answered. @DustinPoirier, you are one bad dude! pic.twitter.com/NcCeodInjA

OMG. Alvarez is just a punching bag!!! And Dustin finally gets the stoppage. #ufccalgary pic.twitter.com/VgbGF9jTEe

The more I watch @Ealvarezfight & @DustinPoirier fight other guys, and each other, the more impressive it is how @TheNotoriousMMA beat them both. And not only that he beat them, but how he beat them. Amazing really

How did you react to Dustin Poirier’s huge TKO win over Eddie Alvarez?