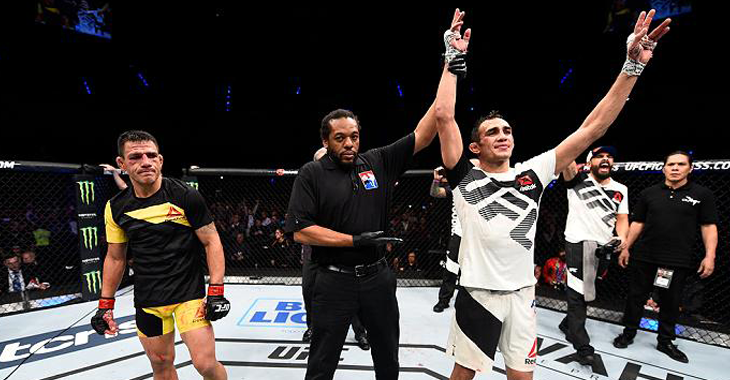 For just the second time in his professional MMA career, Rafael dos Anjos (25-9) has lost two fights in a row.

After losing the UFC lightweight belt to Eddie Alvarez at UFC Fight Night 90 back in July, the former champion fought a tough and exciting battle over the weekend against Tony Ferguson (22-3) at UFC Fight Night 98, which took place in Mexico City. Ferguson was awarded a unanimous decision over dos Anjos and has stacked up nine wins in a row, setting a record that no other lightweight has been to achieve in the UFC. Ferguson is still looking to get his shot at UFC gold on his nine-fight winning streak. With falling short in the bout against Ferguson, “RDA” mentioned in the post-fight Octagon interview that his vision was messed up from an accidental eye-poke but gave Ferguson credit for his fight performance.

“His finger in my eyes bothered them a little bit in the second, I was seeing double, but that’s no excuse,” Dos Anjos said. “Tony did a great job. He was the better fighter today.” On Sunday, Philipe Della Monica, a BJJ black belt who is on Team dos Anjos posted a photo of the nasty eye-poke that the former UFC champ suffered in the fight with Ferguson.

Do you think the eye-poke played a part in Rafael dos Anjos’ performance in the fight against Tony Ferguson? Sound off in the comments!