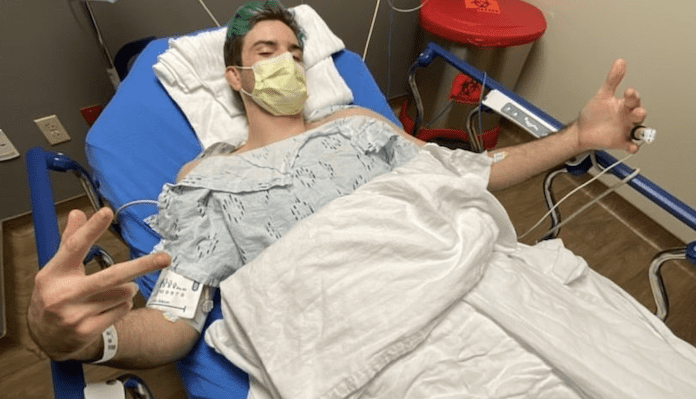 PFL fighter Christian Lohsen announced on social media that he had to have his testicle removed after an MMA training accident.

On Thursday, Lohsen took to his social media to reveal that he had to have his left testicle removed after a training accident. According to the fighter, he was hit with a knee in his left testicle which led to it being ruptured and then surgically removed. It appears as though Lohsen has a good attitude about everything as he cracked some jokes in his post despite the pain he must be in. Take a look at his post below.

So last night was rough… in a training accident I got my left testicle ruptured by a knee which led to it getting surgically removed … thank you to everyone last night that helped me get to the hospital. I’m fine home resting, surgery went well. Doc said I won’t lose testosterone or ability to have kids from this. If I lose the other one however it’s a different story so from now on if you hit me in my last testicle we aren’t friends… lol #NoNutNovember #OneBallWonder #MMAIsADangerousGame #TookNoNutNovemberWayTooFar

Immediately, you had fellow MMA fighters such as Mike Perry, Ben Saunders, and others reach out and offer their well wishes to Lohsen during this troubling time.

Lohsen is a 26-year-old MMA fighter who is currently signed to PFL. In August, he defeated Jonas Flok in his PFL debut to move to 9-2 as a professional MMA fighter. It’s also worth noting Lohsen competed on Dana White’s Contender Series in 2019, where he lost a decision to JJ Okanovich, which is where you may have seen him before.

We here at BJPenn.com wish the best for Christian Lohsen as he looks to overcome this devasting injury and continue having a successful MMA career.