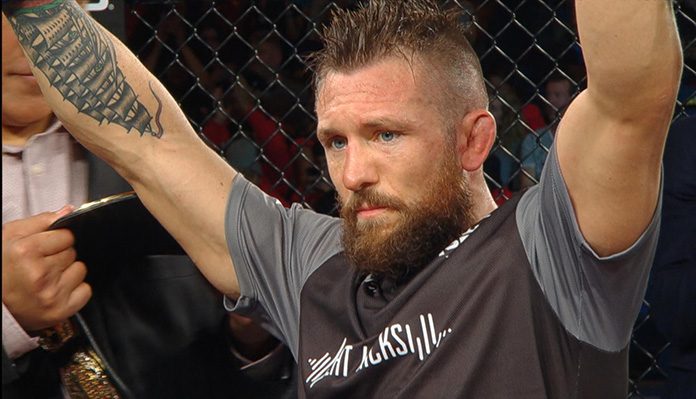 Palmer, a former Team Alpha Male fighter, has been a champion before. ‘The Party’ is a former two-time World Series of Fighting (WSOF) featherweight champion, Resurrection Fighting Alliance (RFA) 145-pound king, and now the PFL season one champ is a million dollars richer.

Still, Palmer isn’t overjoyed like one might expect. A winner in every sense of the word; Palmer has come to expect greatness from himself.

“I’ve won belts before,” Palmer told BJPENN.com in a recent interview. “I’ve won the belt for World Series of Fighting. Defended it, then won it again, so I was a two-time champ for WSOF.

“Winning the PFL belt – that’s what I expected out of myself. It is cool though. Its a great finish to the year and now we take a nice little break before season two.”

For Palmer, the PFL season format is a throwback to his Ohio State wrestling days. And that’s a welcome change of pace for ‘The Party’.

“I love the tournament format,” Palmer exclaimed. “Why would you want to sit around all year just so you can defend your belt at years end? I heard some people saying they would rather have it be that way instead of a tournament. That makes zero sense what so ever.

Palmer was definitely busy last year. He competed five times in 2018, all of which were wins. The year culminated with his New Year’s Eve win over Steven Siler for the featherweight title and the accompanying million dollar payday.

“I trained for a five-round battle,” explained Palmer. “I fought Siler last November, so I knew what to train for, I knew what to expect. And I also knew to expect a better version of him. He is at a new gym training with a new team, but I am as well, and I feel like I have improved so much this last year since I left Alpha Male.

“I knew coming into this that no one was going to stop me if I came in and brought my best.”