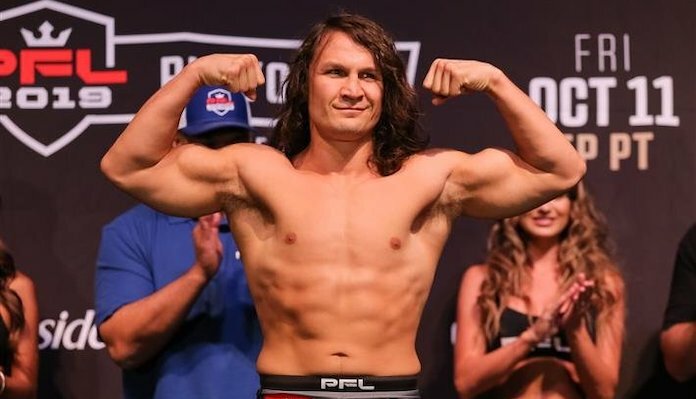 PFL welterweight contender David Michaud says that the starting pay in PFL is about the same as it would be for a newcomer to the UFC.

Michaud just fought Ray Cooper III at PFL 2019 Championship and was knocked out in the second round to lose his chance to win $1 million. It ended a nice run for Michaud in his first year in PFL, snapping a three-fight win streak over Glaico Franca, John Howard, and Handesson Ferreira.

Michaud recently did an AMA on the Reddit MMA subreddit and one of the questions asked to him was how he would compare PFL fighter pay to UFC fighter pay. It was an interesting question with an interesting answer. Here’s what Michaud told the Redditor.

Redditor: Hey man congrats on the year and best of luck to you in the coming one. How would you say pfl compares to the ufc in paying the lower level fighters in the organization I haven’t really looked into the pfl salary system and I’m kinda curious.

Michaud: I thunk the starting pay is the same in the PFL and the UFC. The best thing about the PFL is obviously the big prize at the end of the year. In one year you can go from making 12-12 like I did my first PFL fight to $1,000,000 overall in a few fights, which I did not do. So you can really change your fortunes in a small amount of time. Harder to do that in the UFC

One of the biggest questions about the PFL has been how its pay compares to the UFC, a much bigger organization. Now we have an answer from a former UFC fighter in Michaud himself who has fought for both the promotions. It seems that the pay in PFL is very solid, especially in comparison to other options such as regional events.

As Michaud says, a starting salary of $12,000 to show and $12,000 to win is very similar to the UFC’s known starting salary. However, unless you are a superstar, it’s unlikely a fighter would make $1 million in the UFC after just four or five fights. On that front, the PFL has the UFC beat.

What do you think about the PFL paying its newcomers about the same as the UFC?