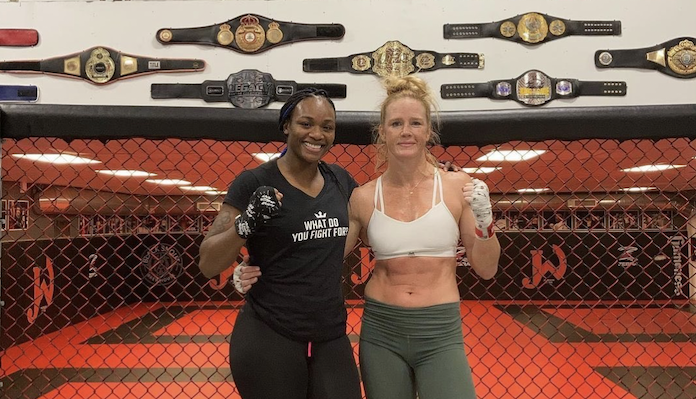 Shields makes her official professional MMA debut this Thursday at PFL 4 when she takes on Brittany Elkin in a non-tournament women’s lightweight bout. Shields is one of the best women’s boxers on the planet but she has said for a few years now that MMA was her goal, and she will finally make her debut in mixed martial arts later this week against Elkin.

Ahead of her MMA debut, Shields has been training at Jackson-Wink MMA and one of her main training partners has been Holm, the former UFC women’s bantamweight champion. Speaking to the media ahead of her debut PFL fight, Shields called Holm her “cheat code” as she looks to make a successful move from the world of boxing to the world of MMA.

Claressa Shields believes Jackson-Wink MMA training partner Holly Holm is the "cheat code" for her when it comes to making the transition from boxing to MMA. #2021PFL4

Claressa Shields believes Jackson-Wink MMA training partner Holly Holm is the “cheat code” for her when it comes to making the transition from boxing to MMA. #2021PFL4

Shields’ debut in MMA is one of the most highly-anticipated for a female fighter in mixed martial arts in many years. With her incredible boxing skills, if she is able to figure out the ground game she could be a legitimate contender in MMA. Of course, we still have yet to see anything besides her striking in professional competition. We know that Shields has phenomenal striking skills, but we still need to see what her wrestling looks like, not to mention her Brazilian jiu-jitsu. Elkin, her debut opponent, has just a 3-6 professional MMA record and seems like a hand-picked opponent who Shields can beat. We will find out soon what working with Holm at Jackson-Wink MMA has done for Shields’ overall MMA game.

Do you think Claressa Shields will be successful in MMA?