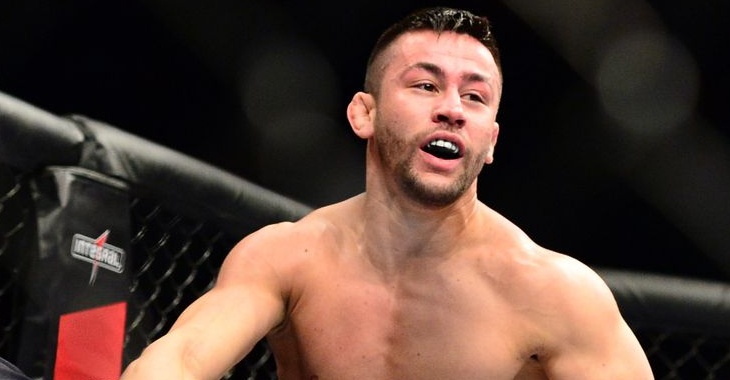 As you may have heard earlier today, the co-main event between John Dodson and Pedro Munhoz for UFC Fight Night 125 in Belem, Brazil is no longer going to happen. From time to time…fighters will indeed miss weight. This was again one of those times but so severely that the fight ended up being canceled. The fight was scheduled as a 135-pound bantamweight bout but Munhoz came in four pounds over at 140.

An official statement from the UFC has since been made:

“After Pedro Munhoz missed weight by four pounds for his UFC Belem bout against John Dodson, UFC officials have pulled the fight from Saturday night’s event. Munhoz weighed in at 140 pounds on Friday morning for the bantamweight bout. Moving into the co-main event slot is the flyweight bout between Valentina Shevchenko and Priscila Cachoeira. UFC Belem, which airs live on FS1, will proceed with 11 bouts.”

As for the 15-2, #10 ranked UFC bantamweight contender, Munhoz, he explained what he believes was his reason for missing weight this time around when speaking to MMAFighting:

”Everything went like in my previous fights. I have a schedule with the weight I have to be when fight week starts, how much I’ll cut every day, and it went all according to the plan. The complicated part was this morning because there was no hot water at the hotel. The hotel we are in has no bath tub, and the hotel they sent us to last night was out of hot water last night. I don’t lose weight in the sauna, I don’t sweat. I lose weight training, like I did yesterday, and I always leave two pounds to cut in the bath tub in the last morning. I lose that in 30, 40 minutes, easy.

I went to the sauna for a long time and didn’t sweat anything. I wouldn’t kill myself trying to make this weight, so we decided to stop and miss weight this time. I’ve never missed weight before. I’m a professional, and I like to make weight, but a lot of things happened this time.”

Munhoz currently rides a very impressive four-fight winning streak that consists of three guillotine chokes and one unanimous decision. In his career overall, he has finished nine of his fifteen wins by submission and his two lone losses have only come to the division’s elite in Raphael Assuncao and Jimmie Rivera.

John Morgan has also reported that the UFC has offered to rebook Dodson vs Munhoz at UFC 222 on March 3.

UFC officials tell me Dodson will be paid a portion of his show money (exact amount not revealed) and have offered to rebook the fight with Munhoz at UFC 222 in Las Vegas.

UFC officials tell me Dodson will be paid a portion of his show money (exact amount not revealed) and have offered to rebook the fight with Munhoz at UFC 222 in Las Vegas.