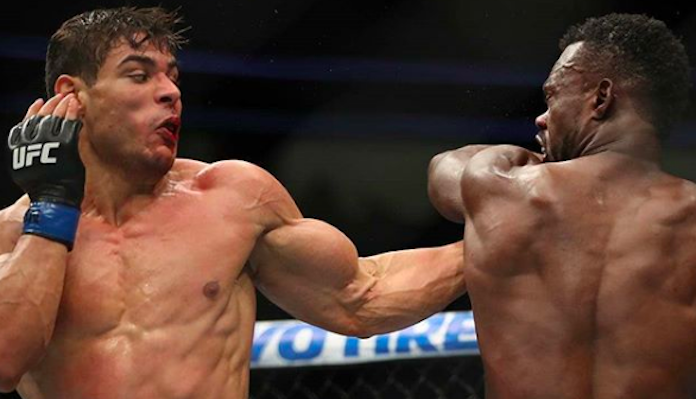 Paulo Costa, who now holds the number-eight spot in the UFC middleweight rankings, boasts one of the most impressive physiques in MMA. His physique is so impressive, in fact, that some naysayers have accused him of doping.

Surfing legend Kelly Slater is one of these naysayers.

”Didn’t Cung Le get caught because he looked suspect in a photo after a fight?” Slater wrote in a comment on a UFC Instagram post about Paulo Costa. “Costa makes Yoel’s physique look almost attainable. If this guy ain’t juiced they shouldn’t bother testing at all.”

Costa, of course, has never failed a drug test in the UFC, despite undergoing a battery of surprise tests from the United States Anti-Doping Agency (USADA), the UFC’s anti-doping partner.

For this reason, he doesn’t take kindly to comments like Slater’s.

“Kelly Slater talked too much, said stupid things,” Paulo Costa told MMA Fighting. “He doesn’t understand how the anti-doping system works in the UFC, he doesn’t know how USADA works, doesn’t understand the USADA policy of testing any fighter at any moment anywhere in the world, blood and urine.

”We do random tests all the time, so if someone says a UFC fighter is fighting on the juice, to me that someone is completely ignorant about MMA, UFC, anti-doping and USADA,” Costa continued.

“It does bother me because people talk without knowing. They judge me because I have a good physique, an excellent condition, and think I got this by cheating instead of hard work, diet, effort and sacrifice. I keep working really hard, so it bothers me because they diminish my work and effort. But I know where my results come from, so my conscience is clear.”

What do you think of Kelly Slater’s accusations of Paulo Costa? Was the surfer out of line?