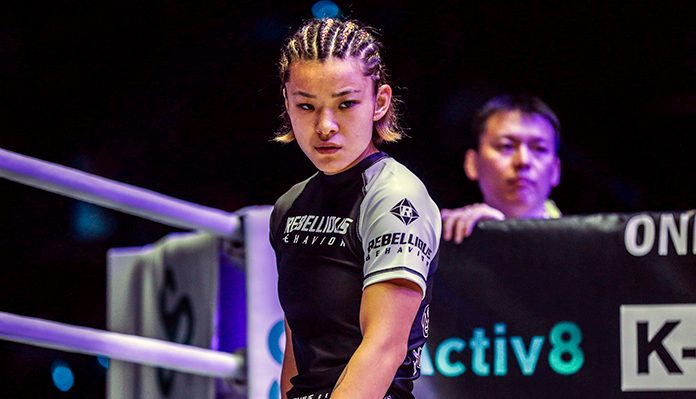 Without question, Itsuki Hirata is coming in as one of the favorites to come out victorious in the upcoming ONE Women’s Atomweight World Grand Prix.

The Japanese grappler is set to take on American bet Alyse “Lil’ Savage” Anderson as they clash in the quarterfinals at ONE: Empower on May 28 in Singapore.

“Finally, I made it to the Grand Prix and I’m just looking forward to it. I’m very excited,” Hirata said ahead of the bout. “A lot of people feel like I can make it to the top, but I don’t feel any pressure. I just turn it to motivation.”

Hirata knows that no matter how far she goes in the tournament, a mentor of hers won’t show any emotion.

“Even if I win, he’s not gonna give me any good words,” Hirata chuckled, referring to Shinya Aoki.

That’s just the dynamic that Hirata and Aoki have fostered through the years.

The two, both known as excellent grapplers, have trained together as Hirata sought to follow the footsteps of Aoki under the ONE umbrella.

After all, Aoki’s resume speaks for itself. The former ONE Lightweight World Champion is considered as the most successful submission specialist in Asian martial arts, taking the best fighters ONE Championship has to offer since his fight against Arnaud Lepont at ONE: Rise of Kings many years ago.

Since then, Aoki has just been at the top of his game, taking on all comers and had a memorable rivalry against Eduard Folayang, with the two trading victories to assert their position as the no. 1 lightweight in the promotion.

Even at 37 years of age, Aoki is as dangerous as they come, as evidenced by his three-fight win streak, his last being a first round submission win over James Nakashima, tapping the American out with a rear naked choke at ONE: Unbreakable last January as he seeks to reassert his place in the ONE rankings and earn another shot at the throne.

Surely, that razor-sharp focus has rubbed off on Hirata, with the Fighting Agent War Tournament Champion considering Aoki as the greatest Japanese mixed martial artist in her eyes.

“No. 1 has to be Shinya Aoki. No one else comes close,” Hirata said.

Yet as stoic as Aoki’s demeanor is, he’s just as concerned for the development of the 21-year-old who is hungry to make a name for herself in ONE Championship.

“Shinya is super strict but also at the same time, he’s a very nice guy and he takes good care of me,” Hirata.

Part of Hirata’s motivation is making the Land of the Rising Sun proud every time she steps in the ONE Circle, all the more in the upcoming ONE Women’s Atomweight World Grand Prix.

Hirata, who owns an immaculate 7-0 pro record, is firm in her goals of continuing her finishing streak with none of her past fights going to the judges’ scorecards. Only once, against Nyrene Crowley at ONE: Warrior’s Code, did one of her fights extend to the third round, further proving her ruthless nature once the bell rings.

“It’s very important for me to continue the finishing streak,” Hirata said. “Everyone wants to see a finish more than a decision and I value the finishes as something important, so I want to continue that streak in the Grand Prix.”

But before Hirata gets her shot in the spotlight, Aoki will be the first to step up to the plate.

He battles Sage Northcutt, who is making his ONE comeback after two years of inactivity, at ONE on TNT IV on May 28.

We all know who Itsuki  Hirata will be rooting for.