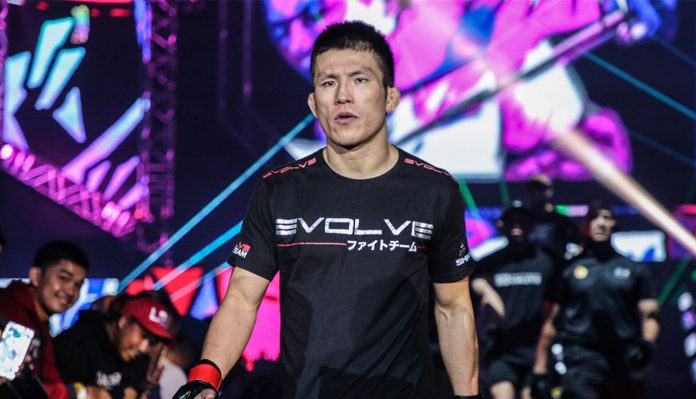 Shinya Aoki is no longer motivated by money or world titles. The Japanese MMA legend strives only to continue doing what he loves as long as possible.

Aoki, one of the most lethal submissions in MMA history, is set to return to action at ONE: Unbreakable next Friday in Singapore, where he’ll welcome former LFA welterweight champion James Nakashima to the lightweight division.

Over the course of his long and illustrious career, the 37-year-old submission ace has battled the likes of Joachim Hansen, Gesias Cavalcante, Caol Uno, Eddie Alvarez, Gilbert Melendez, Tatsuya Kawajiri, Kazushi Sakuraba, Ben Askren, Eduard Folayang and Christian Lee—and beaten many of them.

The fight with Nakashima, who recently came up short against ONE welterweight champ Kiamrian Abbasov, is the latest on a long list of tough tests for Aoki, and just the kind of challenge he welcomes.

“As everyone has been mentioning, Nakashima did compete in a higher weight class previously,” Shinya Aoki told BJPENN.com on Thursday, speaking through his translator in his trademark growl. “In terms of his last performance, just because he lost I don’t see him as any less. I think he’s a very competent fighter, a very strong fighter.”

If Aoki defeats Nakashima in Singapore, he’ll move onto a three-fight win-streak, and position himself for more big fights in the perilous ONE lightweight division. Of all the items on the menu, it’s likely a tie-breaking trilogy fight with his long-time rival, former UFC and Bellator champ Eddie Alvarez, will be the most appetizing among fans.

Aoki, however, is content to fight whomever ONE Championship deems the most suitable foe.

“I don’t really have this feeling of who I want to fight,” Aoki said. “I just fight whoever I’m matched up with. I’ll take anyone, and I’m ready for anyone, and I’d rather consistently fight in that way.

“I don’t particularly think it matters if I want to [fight Alvarez] or not. If it adds to whatever event is going on, I’ll be happy to compete against Eddie Alvarez again, but at the end of the day, I’ll take on whoever.”

Aoki’s willingness to take on all comers can be attributed to the fact that, even at 37 years old, he’s still fighting and winning at a very high level.

The veteran says there’s no big secret to his longevity in the sport, but he does think it boils down to three factors.

“It comes down to three aspects,” Aoki said. “I’ve stayed natural—I’ve stayed clean for this long in terms of doping. I’ve also had no dramatic weight cuts. Finally, I just have passion for the sport and taking time every day to continue training.”

Because he’s still competitive at such an elite level of mixed martial arts, Aoki has no plans to retire. In fact, he’s determined to delay that inevitability for as long as possible.

“I’m not thinking about retirement, period,” Aoki said. “This is a way of life for me. I want to continue being a fighter for as long as I can. A lot of people have intrinsic motivations, be it money or family or something along those lines, but it’s just part of my lifestyle, and I’ll continue for as long as I can.

“I don’t really see becoming the lightweight champion as a goal,” he added. “I’m sure many people have that goal. I don’t really see the belt as something I need to get once again, as long I can continue training and stay healthy and fight as long as I can. That’s what’s important for me.”

While Aoki has no plans to retire, father time is undefeated. There will come a day when he’s left with no choice to hang up the gloves.

When that day comes, he will likely be hailed as a legend by hardcore MMA fans the world over, but that’s not of particular concern to him.

“I don’t consider myself a legend, and I think it’s kind of embarrassing when people that are still active call themselves legends,” he said with a laugh. “I don’t know when the end will come. I’ll just take it day by day. There isn’t a way in particular that I want to leave a legacy.”

So long as his body doesn’t start failing him, Shinya Aoki isn’t going anywhere. That probably means many more big fights for his fans to enjoy, whether there are titles on the line or not.

The immediate priority, of course, is his looming battle with Nakashima, and the opportunity to show off the full and deadly breadth of his arsenal.

“I just want to stay healthy and be proud of my performance and go home and proud of what I accomplished.”