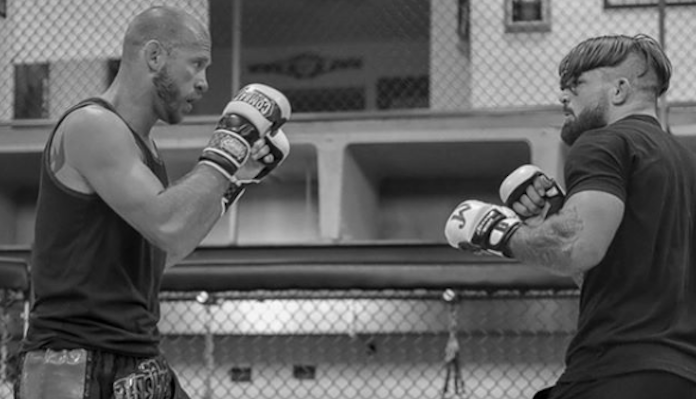 On November 10, on the main card of UFC Denver, “Platinum” Mike Perry will step into the cage with Donald “Cowboy” Cerrone. This, of course, will not be the first time the two welterweight fan favorites have met.

Earlier this summer, the pair got some sparring in in, both at JacksonWink MMA, and at Cerrone’s BMF Ranch.

Speaking on MMAjunkie Radio this week, Mike Perry dished on the sparring sessions he had with Cerrone.

“So I go to the BMF ranch – this would be the second time we sparred,” Mike Perry said (transcript via MMAjunkie). “We didn’t even spar, because he’s so easy for me to punch in the face that I didn’t punch him in the face like that. I was throwing jabs, and I was able to just touch him with the end of my glove, and I was like, man, I’m not going to open up on him here in his house on his ranch with all his people around.

“So I start shooting takedowns, and he kind of reversed me. I got up once or twice, and then the last 10 minutes of that round, he was on top of me. I was trying to pull some sweeps, or subs, but he’s a slick grappler, too. I wasn’t able to get him off of me the last 10 minutes.

If it sounds like Mike Perry is worried about getting out-grappled on November 10, think again. While Cerrone got some nice reversals on him, these occurred after Perry took the fight to the ground. He doesn’t think Cowboy will be able to ground the fight on his own accord.

“Maybe he thinks he’s going to grapple me and make it a boring fight, but the problem is, when he shot on me in the cage at Jackson Wink, he’s too weak to take me down,” Mike Perry said. “Wrestling is the mid-game, when you’re in the clinch trying to get the takedown – not when I’m shooting the takedown on you and my feet stumble over each other, and I can’t get your long ass off me.

“He’s not going to be able to make a boring fight and walk away with a slow win to make him the winningest fighter ever… . He knows if he can’t beat me in three, then he’s in (expletive) trouble. I’m telling you, I’m going to beat him in three. I’m going to knock him the (expletive) out.

“When he got TKOd, there’s three people, (Jorge) Masvidal, Darren Till and (Rafael dos Anjos). He was still protecting himself, and they were punching him in the shoulder. I want to put him to dead, cold sleep. That’s my thing.

“That’s nothing against him. We’re fighting. We signed the contract, and I’m trying to put this (expletive) out.”

Who do you think will win when the cage door closes on Mike Perry and Donald Cerrone in Denver?