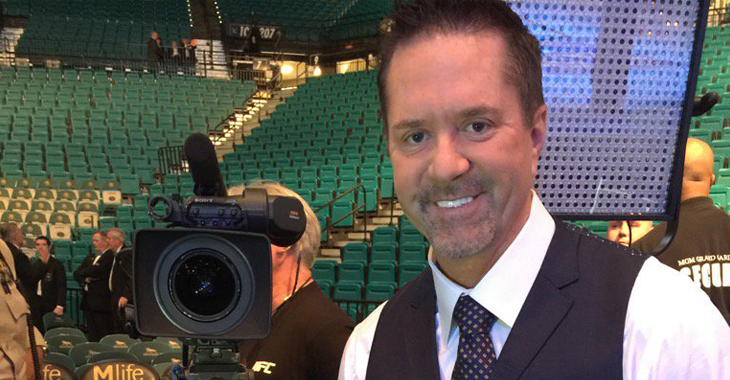 Shortly after the UFC was purchased by entertainment giant WME-IMG midway through 2016, a string of high-profile layoffs began. The most significant of these layoffs occurred at the end of the year, when we learned that long-time UFC commentator Mike Goldberg would be parting ways with the organization after UFC 207 on December 30.

On the most recent episode of The MMA Hour, Goldberg opened up on his departure from the UFC, which was not even mentioned during his final broadcast. Unsurprisingly, he said the news that his contract would not be released was not easy to to take.

“It was a shock,” he said. “I was speechless. I didn’t know what type of emotion to have, because I was just in a state of shock and disbelief. People love that warm, fuzzy blanket. That’s what you were describing a second ago, and [broadcast partner] Joe [Rogan] and I have been that warm, fuzzy blanket for a long time when it came to the UFC. Everybody gets new blankets and they get new furniture, but at the end of the day, when you cuddle up on a Sunday and you watch football, that blanket in the corner that’s got holes in it, and it’s kinda smelly but that’s your blanket, that’s the one you utilize.” Goldberg went on to explain that, though he might be the most high-profile UFC employee to be laid off in the wake of the company’s sale, he’s no different from anyone else who lost their job. He explained what it was like to watch these mass layoffs occur, and what it was like to eventually find himself in the firing line.

“I’m no different than the guy in merchandise, or the 15 vice presidents who got let go, or the entire team in Canada that was shut down,” he said. “I’m not the only guy who was let go by the new ownership. Well over 100 people [were let go], and good friends of both yours and mine. I’m the one being talked about because I had the high-profile job, but I’m not going to sit here and weep because new ownership came in and I was one of the guys who got cut. I was one of a lot of people, and a lot of good people, from the Zuffa era who got cut. And so I felt for my co-workers, for my friends, as much as I felt for myself.”

“I watched everything around me be shattered,” Goldberg continued. “It took 15 years to build this wonderful family, and it felt like it was taking 15 minutes to destroy it. And it just was a really tough time, and it may still be tough. There may be more to come throughout the UFC family. This is not uncommon in an ownership change with anything.”

Finally, Goldberg recounted the emotional moments after the UFC 207 broadcast was over, when the curtains had officially closed on his time with the UFC.

“We all sat there as the building was cleared, and we actually all got in the Octagon and did pictures,” Goldberg said “Joe and I had a couple of big hugs. There were tears. There was confusion. Disbelief, for sure. Frosty, our longtime audio guy, it was his last show. It was Kru Mark DellaGrotte’s last show. Again, going back to the family, and it was emotional. Being with my stage manager for all of those years, we did pictures. We haven’t done pictures in the Octagon in about 100 years, but [we] did that night. And we all went back to the dressing room, and Bruce Connal, our longtime producer, and Anthony Giordano, we all just sat there for about an hour and we just shook our heads. Like, ‘how is this happening? How is this ending?’ Back to the shock and disbelief.”

Do you think the UFC made the wrong call by releasing Mike Goldberg? Sound off, PENN Nation!