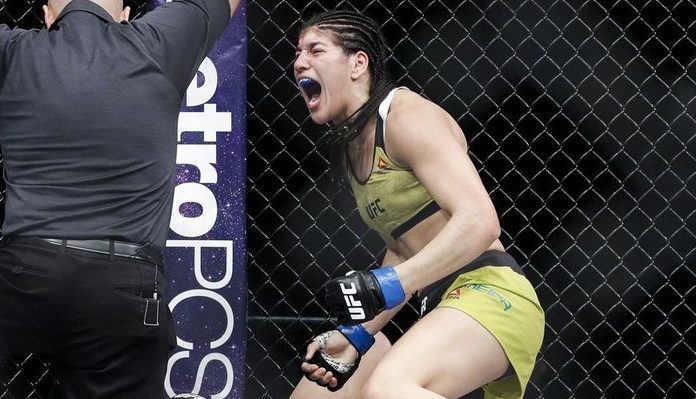 Tate (19-7 MMA) returned from a four-year hiatus at July’s UFC Vegas 31 event, where she scored a third round TKO victory over Marion Reneau. That served as Miesha’s first win since March of 2016, when she submitted Holly Holm at UFC 196 to capture the promotions 135lbs title.

Meanwhile, Ketlen Vieira (11-2 MMA) was last seen in action back in February, where she suffered a unanimous decision loss to Yana Kunitskaya. That setback was preceded by a victory over Sijara Eubanks in 2020.

Round one of the UFC Vegas 43 main event begins and Ketlen Vieira presses forward early. Miesha Tate keeps her at bay with a jab. She throws a body kick that misses. Ketlen answers with a 1-2 combination. ‘Cupcake’ counters with a combination of her own. She lands a jab as Vieira just misses with an uppercut. Tate swings and misses with a low kick attempt. Ketlen Vieira with a nice jab up the middle. Miesha looks for a right hand but gets countered by another jab. The former champion decides to rush in with a flurry. That seemed to result in some short shots landed. Tate with another right hand and then she presses Vieira against the cage. The Brazilian breaks free but ‘Cupcake’ stays on her and pushes her back up against the fence. Vieira dives for a takedown. Miesha Tate stuffs it and looks to take her back. The horn sounds to end round one.

Round two of the UFC Vegas 43 main event begins and Ketlen Vieira comes forward with heavy punches early. Miesha Tate circles to her right and resets. The former champ sticks her jab in the face of her opponent. She follows that up with a big right hand that connects. Vieira replies with a right cross followed by a hard low kick. Another good combination from the Brazilian. Tate with a low kick and then a left. Vieira counters with a nice right hand. ‘Cupcake’ with a front kick up the middle. The ladies begin to stand and trade punches. Tate with a right, Vieira answers with a left. Miesha Tate shoots for a takedown but Ketlen Vieira is having none of it. Tate lands a pair of right hands and Vieira answers with a crisp jab. The horn sounds to end round two.

Round three of the UFC Vegas 43 headliner begins and Miesha Tate and Ketlen Vieira are back to trading leather. ‘Cupcake’ accidently connects with an eye poke and we have a brief break in the action. We restart and Tate looks to get inside behind her jab. Vieira is doing a good job of keeping the distance. Miesha continues to press forward but any time she enters the pocket, she eats a hard counter strike from the Brazilian. Tate goes to the body of Vieira with a pair of jobs. Ketlen circles and then lands a combination of her own. Miesha Tate with a nice low kick. Vieira replies with a combination. The former champion dives in on a takedown. Ketlen Vieira defends and then attempts to create distance. Tate won’t let her and pushes her against the cage. Knees and punches from ‘Cupcake’ to close out round three.

Round four of the UFC Vegas 43 main event begins and Miesha Tate is able to land a big right hand to get things started. She continues to press forward but is having a hard time avoiding the jab of Ketlen Vieira. Tate with a jab and then shoots in and scores a big takedown. She sinks in one hook as Vieira looks to get back up to her feet. She does but Miesha is still draped all over her. Ketlen eventually shakes Miesha off and now both ladies land big punches. Tate with a hard low kick. Vieira counters beautifully with a right hand. She follows that up with a 1-2. Tate shoots for a takedown but it is not there. She opts for a big right hand that partially connects. The fighters clinch and Vieira lands some uppercuts. Miesha with a pair of knees. The horn sounds to end round four.

The fifth and final round of the UFC Vegas 43 headliner begins and Ketlen Vieira lands a right hand. Miesha Tate changes levels in hopes of a takedown but nothing is there. Vieira with another combination. Tate answers with a pair of kicks to the body. The ladies are standing and trading leather now. Big shots from Vieira. Tate stays in the pocket but eats another jab. Ketlen with a big right hand and Miesha’s nose is busted up. Two minutes remain as ‘Cupcake’ lands a jab to the body. She leaps in with a big right hand over the top that connects. Vieira is backing up a bit now and Tate senses it and lands a combo. She swings and misses with a wild right hand. A head kick attempt also misses for the former champ. She continues to apply pressure in the late moments but Vieira keeps her from getting off anything serious.

Who would you like to see Vieira fight next following her victory over Tate this evening in Las Vegas? Share your thoughts in the comment section PENN Nation!