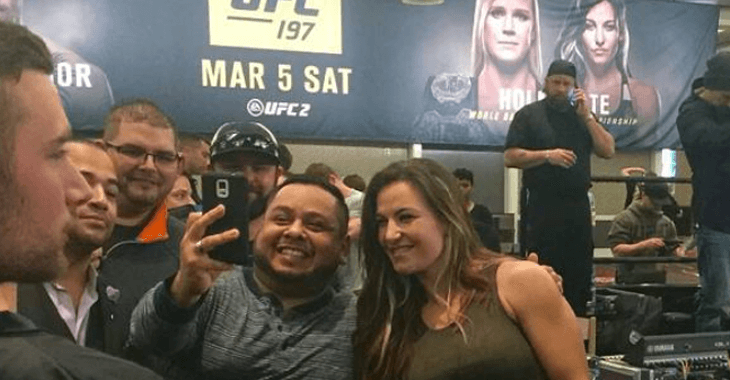 UFC women’s bantamweight title contender Miesha Tate is looking to be in great shape ahead of her title fight with Holly Holm scheduled for UFC 196 on March 5.

This will be Tate’s second chance at the UFC women’s bantamweight title with her first attempt falling short against former champion Ronda Rousey. “Cupcake” lost against Rousey back on December 28, 2013 by submission. Rousey’s perfected armbar forced Tate to tap in the third round.

Tate will face a different set of skills in the current champion Holly Holm who devastated the world by knocking out Ronda Rousey at UFC 193 back in November of last year. Holm who comes from a background as a professional world champion boxer showed that she had more than enough ground skill to compete with Rousey, but it was a head kick that ended the reign of Rousey.

Check out the photo below of Tate posing with a fan that she posted to her Instagram account. Will the size and muscle of Tate be to her advantage over the taller and undefeated Holm?

“I think Holly is the kind of competitor that will rise to any level of competition, and that is what makes her dangerous,” Tate said at the UFC 197 Press Conference (the UFC 197 event name was recently changed to UFC 196). “I think my style is very different than Ronda’s. So it will be a different puzzle for Holly, but Holly will be a different puzzle for me, and that is what makes this sport interesting.”

How do you see the fight going fans? Will Holly Holm prove to be as dominant of a fighter as she showcased against Ronda Rousey? Or will Miesha Tate’s style present problems for the new UFC champion? Share your opinion in the comment section on how you see the fight unfolding in Holly Holm’s first title defense as the UFC women’s bantamweight world champion.