Former UFC women’s bantamweight champion Miesha Tate is not interested in having her next fight come against Aspen Ladd.

Tate (19-8 MMA) returned to the Octagon in the headliner of last month’s UFC Vegas 43 event for a showdown with perennial bantamweight contender Ketlen Vieira (12-2 MMA).

Unfortunately for ‘Cupcake’, despite putting up a valiant effort she wound up suffering a unanimous decision loss to her Brazilian opponent. Miesha Tate struggled to avoid the jab of Vieira and could not take the fight to the floor despite multiple attempts to do so.

Although undoubtedly disappointed with the final result, Tate to appeared to be in good spirits after the loss.

“Hey we had fun tonight!! I still feel like I evolved and in truth I was never tied to an outcome. Just happy to enjoy these moments. Thank you as always for the support and congratulations Ketlen Vieira.” – Tate shared following the setback.

In the immediate aftermath of her defeat at UFC Vegas 45, Miesha Tate received a callout from Aspen Ladd. 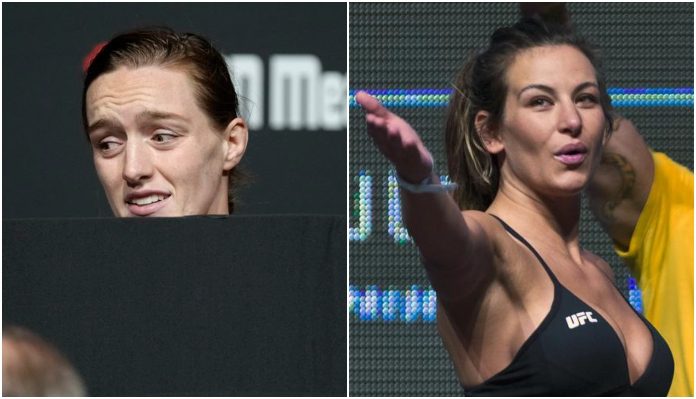 Tate and Ladd of course have a history, this after ‘Cupcake’ bashed Ladd’s boyfriend and coach Jim West for his cornering advice, or lack there of, in Aspen’s loss to Norma Dumont.

Despite the fact that a grudge match versus Ladd would obviously be popular amongst fight fans, Miesha Tate is not willing to ‘risk’ a fight camp on the 26-year-old.

“Aspen Ladd has called me out to a fight at 135 pounds. I’m afraid that I’m going to waste an entire camp training for a fight that may very well end at the scale,” Tate explained. “Aspen Ladd has missed weight three times in her MMA career and one time she failed to make it to the fight due to weight cutting issues. So all in all four times. Go to PI (performance institute) show some kind of progression. If one of these other bantamweights wants to take that risk then hats off to them. If Aspen Ladd can show up, make 135 pounds and have a good performance then we might be talking.”