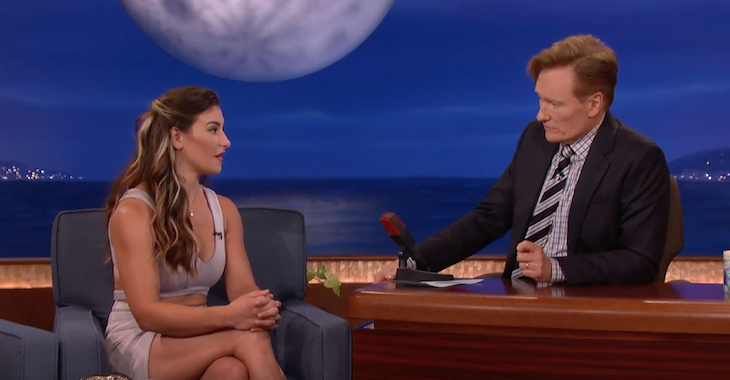 After nearly a decade as a professional fighter, Miesha Tate captured UFC gold after choking Holly Holm unconscious in the co-main event of UFC 196 on March 5th. Following the fight, many began calling for a trilogy fight with Ronda Rousey, who was on an indefinite hiatus after being brutally knocked out by Holly Holm in November.

While Tate may be down to scrap with Rousey a third time, Rousey has yet to announce her plans to return to the Octagon. The former champ is currently filming movies in Hollywood, and while UFC President Dana White has stated that Rousey will fight in November, Tate isn’t so sure. In addition, Tate pointed out that she doesn’t want to overlook her UFC 200 opponent, Amanda Nunes. She spoke on Conan on TBS:

“Right now I’m really trying to stay focused on Amanda and I know everyone’s so excited for that Rousey fight. I hope that’s something that happens, but I don’t want to overlook Amanda cause if I don’t beat Amanda, there’s no next,”

“Granted, I go out there and do that, I feel like I’m in a really good spot. I’m at the top of the world and I feel crazy possessive over (the title). That’s my baby and I’m going to protect it.”

“I’m at the best point in my career and she’s at the worst,” Tate said. “So I think I bring a level of confidence and I’ve been defeated before, but I’ve come back stronger for it. I question whether she will be able to do the same.”

“You either get up and get back on the horse and come back stronger for it or you sit out for over a year.”

“People want to call it trash (talking) but it’s just me being honest.”