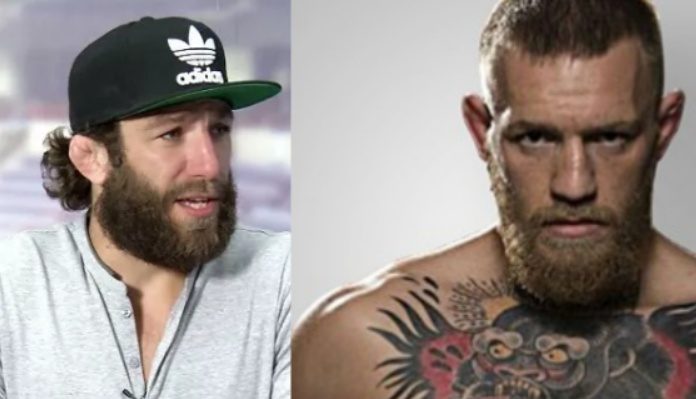 There’s no way that anyone will be forgetting the UFC 223 Conor McGregor bus attack anytime soon, especially all of those who were involved. And judging by the promos for UFC 229…the UFC doesn’t want anyone to forget either.

One of the said fighters involved and fell victim to the attack was UFC lightweight contender Michael Chiesa.

At UFC 223, Chiesa was set to take on former UFC and WEC champion Anthony Pettis before McGregor came into town. Chiesa suffered cuts to his face and body from the attack which prevented him to compete on the card.

The fight would later be rebooked for UFC 226 where Chiesa would suffer defeat via second-round submission.

Regardless, TMZ has reported that Chiesa has gone through with his plan to sue the former lightweight champion, McGregor for the injuries suffered as well as “severe emotional distress, mental trauma and/or bodily harm”.

The lawsuit filed is specifically for assault, battery and intentional infliction of emotional distress.

Chiesa is also suing the venue of UFC 223 which was the Barclay’s Center in New York City for negligence as he claims that they failed “to engage in proper security measures to protect the plaintiff and other patrons”.

The amount that Chiesa is looking to receive is unknown but it’s believed to be a fairly large number as the situation resulted in him losing out on fight pay that he would have received if the incident didn’t occur.

The Ultimate Fighter season 15 winner isn’t the only one who was affected by what took place in April as Ray Borg also suffered injuries from the glasses that prevented him from fighting as well.

UFC featherweight Alex Caceres also lost out on his fight with Artem Lobov due to Lobov’s involvement by aiding McGregor which resulted in Lobov’s removal from the card.

Among other fighters notably affected was the strawweight champion Rose Namajunas who reportedly is still having mental stress from the incident.