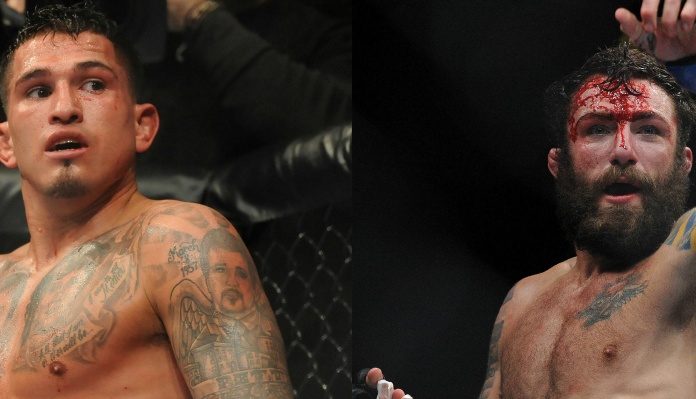 Michael Chiesa missed weight for the fight coming in at 157.5 lbs. As a result, Chiesa will forfeit 30% of his fight purse to “Showtime”.

Chiesa entered tonight’s contest sporting a 14-3 record, while his opponent Anthony Pettis came in at 20-7 overall.

Round one begins and Chiesa comes out quickly. He pushes Pettis against the cage and secures a double leg takedown. Michael is working from half guard here. Pettis is searching for a choke but it is not there. Pettis looks to scramble but Chiesa has his neck and is working for an arm triangle. Pettis scrambles and sneaks out. He actually takes the back of Chiesa and after another scramble we are back on the feet. Chiesa immediately shoots in for a takedown. Pettis is able to shrug him off this time. Pettis pushes Chiesa up against the cage now. The fighters battle in the clinch and then Chiesa drops for a takedown attempt. Pettis defends momentarily but eventually Micahel gets the fight to the floor. Chiesa working from full guard here. Pettis throws a kick from his back that gets the attention of Chiesa. Anthony scrambles back to his feet and fires off a kick to the body. Chiesa shoots in for a single leg takedown but it is not there. Pettis with a hard low kick. He lands another. Chiesa did not like that. Pettis with a nice straight right hand down the middle. Chiesa with a kick but Pettis catches it and takes him to the floor. Pettis with a right hand from the top. He lets Chiesa up and then just misses with a crazy spinning kick. Chiesa retreats and Pettis charges forward with a right hand that drops Michael at the buzzer.

There's some serious bad blood in this one ..#UFC226 pic.twitter.com/A4eg5eiZkI

Round two begins and Pettis lands a kick to the body followed by a right hand. He charges at Chiesa and locks in a standing choke. He drops down for the guillotine but Chiesa is able to escape. Michael is on top now. Pettis locks in a triangle choke. He switches to an armbar and this one is over! WOW! Pettis forced Chiesa to tap.

We are off to one CRAZY start at #UFC226! pic.twitter.com/yKddRo8FjS